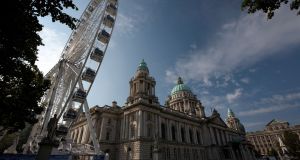 The two soccer associations on the island of Ireland are this week faced with the dilemma of deciding how to respond to a controversial invitation to a joint reception at Belfast City Hall to celebrate the Republic and Northern Ireland qualifying for Euro 2016.

Amid unionist-nationalist wrangling, Belfast City Council last week adopted an SDLP motion calling for a joint reception to be held for the two soccer teams.

Privately officials in the Football Association of Ireland (FAI) and the Irish Football Association (IFA) are anxious not to get drawn into a row that could sour the general feelgood factor about both teams qualifying for the European championships in France this summer.

“Certainly it’s been played out in the media as a very divisive and contentious issue,” he added.

The invitation proposal, tabled by SDLP councillor Declan Boyle, was adopted after a heated debate, with some unionist councillors saying the motion was divisive and “politically motivated”. Other councillors questioned the wisdom of debating such a motion, particularly as the Northern Ireland team had attended a reception at City Hall in November. It was held before the Republic qualified.

This was defeated. Another amendment tabled by Ulster Unionist Party member Jim Rodgers that these four teams be invited to a civic reception was also defeated in a vote.

DUP member Christopher Stalford said soccer fans would be “appalled” by the nature of the debate, which some councillors described as toxic. He suggested people in the Republic would consider them a “bunch of wallies”.

Other members said the issue was being made a “political football”, while independent unionist councillor Ruth Patterson said politics should not be brought into sport.

Spokesmen for the FAI and IFA said they could not comment at this stage as the invitations were yet to be received in Dublin and Belfast.

A spokesman for the council said the invitations would be received at the latest sometime this week.

FAI and IFA sources said both organisations were conscious of the political sensitivities and were anxious not to be drawn into any dispute that could jaundice what, as Mr McAllister said, is a positive story on both parts of the island.