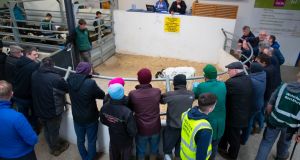 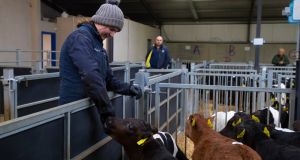 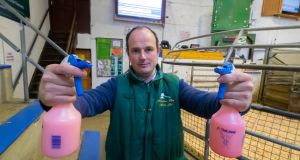 Mart manager Richie Kirwan stands in front of a screen displaying live feeds from up to a dozen CCTV cameras that show the happenings in pens at the co-operative-run mart in New Ross, Co Wexford.

Usually, hundreds attend; though everything is being done to comply with social distancing rules, including the 100-person limit now laid down in the battle against coronavirus.

Following talks between the marts’ umbrella body, the Irish Co-operative Organisation Society (Icos) and the Department of Agriculture, marts will stay open as long as they comply with the rules.

The Government, supermarkets and others have repeatedly reassured the public that there is no need for panic-buying. For shelves to be refilled, says Kirwan, the country’s marts need to keep rolling on.

Many of the animals sold in New Ross are bought by processing plants: “We’re lucky we’re left open,” Kirwan says. “If you’re on the outside looking in, you’d think this would have to be shut down. But this is a vital cog in it all.”

“It’s business as usual, just not as normal,” says Kirwan, as he rolls through recent sales figures. Last Saturday, New Ross saw 900 calves for sale, 180 cows, 60 pens of heifers and 80 pens of bullocks.

Closure would risk a “backlog” of animals, causing a knock-on effect on the supply chain towards shops, as well as causing animal welfare issues, the New Ross mart manager says.

Farmers have a major role to play in the days ahead, says IFA National Livestock chairman Brendan Golden, but the safety rules will have to be followed, including a ban on those not directly involved in the sales of animals.

Icos livestock and environment executive Ray Doyle says the decision to remain open or close will, for the moment, remain for each mart, but the crowds attending in the last week have been a fraction of their usual number.

“It’s just the buyers who’re in there and the sellers seem to be staying out, so the message seems to be getting across,” he says of last Saturday’s sales, adding that social visitors, children and “vulnerable people” are barred until further notice.

The new rules are doable for New Ross, which has two rings in separate buildings that are classed as separate gatherings, but tighter restrictions could follow, depending on the scale of the spread of Covid-19.

While numbers are down, some farmers still huddled together: “Strictly speaking everyone should be over a metre apart,” Saturday’s announcer at the calf ring told those gathered. “You’re all over 18 anyway.”

Tighter restrictions on numbers may be announced soon, which could see the mart using a rotation system where only a small number of farmers are allowed at ringside for each sale.

Older farmers are hard to keep away, though: “Some of the older fellas are very hard to talk to, they don’t want to listen about staying away. The pubs are going to be closed now, so it’s one less place to go,” says Kirwan.

“But then the creamery is gone, the local post office is gone. The mart is probably one of the last old pillars of rural society still going. But the elderly are the danger group, so it’s for their own good that we’re trying this. If everyone uses common sense, we’ll get through

“I’ve an 89-year-old father who’s at home. All I can do is disinfect myself as best I can and follow the guidelines. Life still has to go on too. He’s living on his own and he needs social interaction as well, you can’t just close the door.”

While panic buying has affected supermarkets, there have also been signs of panic selling at marts, says Kirwan. Several sellers agree, including James Nolan, who farms in Butlerstown outside Waterford city.

The coming days will be the killer, he says: “It’s okay up to now but it’s from the next few days that the trouble is going to start. If they close down the mart there’s going to be a build-up of cattle. You’re going into the peak of cattle sales now.”

Icos is talking to the Department of Agriculture about spreading out its usual peak spring sales over the coming weeks in a bid to spread the risk, but also guarantee continuity of supply.

“It looks like fellas are trying to get out before the whole thing blows. You can be stuck with cattle that you know the dates are coming up on and you can’t turn over animals as well as before,” Yvonne admits.

Meanwhile, mart staff are sanitising everything they come across, “from door handles, to cattle cards, up to and including the teats of every cow”.