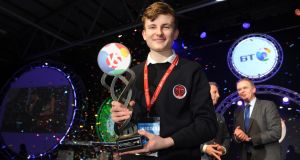 Last year’s BT Young Scientist Adam Kelly has criticised the decision of the Minister for Education to cancel the Leaving Certificate oral and practical exams.

The move will make matters even more difficult for the “middle to lower” student, he told RTÉ News at One.

Adam, who is studying for the Leaving Certificate at Skerries Community College, said the Minister’s decision was not what had been expected.

“I have a lot of friends who were quite reliant upon doing particularly well in those components in order to get some sort of edge on the points and now you’ve got everybody getting 100 per cent and that makes the written paper more competitive.

“The general consensus among everybody I’ve talked to is that even though the practical work is going ahead, it still needs to be done during school time, assuming that we’re not going to be back to school for maybe four more weeks at least, that means that time for the practical work is going to take even more away from the missed class time. That will make the written paper even more difficult for those subjects,” he said.

The Leaving Certificate was already generally quite stressful, he added. “Yesterday with the UK announcing that all of their exams were cancelled, a lot of my friends had applied to go to university in the UK, I know for me, I have to sit an extra exam to get into the college in the UK that I want to and now all the A-level students who don’t have exams can just study only for that for 12 weeks.

“Every day brings something different, a lot of people’s parents are impacted by this, siblings are at home, it’s incredibly busy, school takes up so many hours of the day that even if you do some amount of study it won’t even come close to what you’d normally be doing. Once you add on the general stress and anxiety about being out of school, it just makes things so much worse for everybody.

“There have been mixed messages from the media on the day-to-day life of students, yes, there are teachers who are continuing to help and support students running online classes, doing amazing work online, but this isn’t true for every school. A lot of students have really been left on their own.

“What we expect is that the high-performing students will perform even better, because they can just study all day, but the middle to lower student is going to be hit even harder because it might have been hard to study at home already, but at least you had to go to school and were getting some amount of work done there, now you need to be incredibly self motivated.

“Minister Joe McHugh said if we’re able to be back in school before the Leaving Cert, we’ll be able to run the Leaving Cert, what about if we’re back at school for a week? And we missed 10 weeks of school before we sit our exams. Significant parts of most of the courses have not been covered, looking specifically at some of the broader subjects like maths and geography — those subjects are quite lengthy courses and they haven’t been completed in many schools and also many teachers don’t have the facilities to continue on.

“Saying that they’ll just go ahead like normal doesn’t take into account first of all the unfairness that was spoken about in just giving students 100 per cent in half of their exams and also the unfairness of some schools having some full on classes running every day and others being left in the dark.”