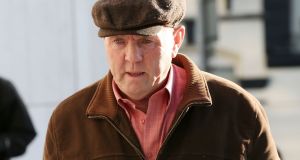 Thomas “Slab” Murphy arriving at the Special Criminal Court: the court was “satisfied beyond reasonable doubt” Murphy was guilty on all of the indictment’s counts. Photograph: Collins Courts

On the 13th day of the trial for tax evasion of Thomas “Slab” Murphy, his defence counsel, John Kearney QC, apologised to the court. “You didn’t wander in for entertainment,” he said. “It’s a dry case.”

Expected to last no more than three weeks, the trial instead lasted nine. There was Murphy’s herd number: 0127124X. There was his bank account number. There were the account’s transactions. The numbers of cattle bought and sold. The value, in Irish pounds and euro, of those cattle. The payments received from meat factories. The farming grants paid by the Department of Agriculture. Exhibits, a seemingly endless stream of them, referred to by number. And a key prosecution witness, a Revenue bureau officer, known in court only as “RBO35”. The judges disappeared behind a pile of chits, invoices, cheques and bank drafts.

“We are mesmerised by the figures,” Mr Justice Butler said, in a court more accustomed to evidence about alleged IRA activity.

The opening week’s evidence was interrupted on three occasions by what prosecuting counsel Paul Burns SC described to the judges as “inconsistencies” between witnesses’ evidence and statements earlier given to gardaí.

Brian Garvey, a Co Meath farmer and landowner, who had rented land to Murphy and his brother told Mr Burns: “I can’t remember Tom ever handing me money.”

Frustrated, Mr Burns said he wanted to make an application, under section 16 of the Criminal Justice Act 2006, to read Mr Garvey’s 2006 statement to the Criminal Assets Bureau (Cab) into evidence.

The application was contested by Murphy’s junior counsel, Tony McGillicuddy. After a day of legal argument, the three judges granted Mr Burns’s application, and Mr Garvey’s statement was read into evidence.

Later, Patrick Flanagan, a veterinary surgeon, was asked by Mr Burns if he had witnessed Murphy signing Department of Agriculture forms for TB testing for cattle. Replying, Mr Flanagan said: “I can’t recollect anyone specific signing the forms.”

Another section 16 application was made. Mr Burns read Mr Flanagan’s earlier statement to the court: “I have witnessed the three Murphy brothers sign various Department of Agriculture forms related to TB testing up to 2005,” it said.

“This is a crucial piece of evidence from the prosecution’s point of view,” Mr Burns said.

The application was granted.

The numbers accumulated. The documentation piled up.

“I’m about to disappear after this one,” Judge John O’Hagan said as he was given yet another binder dealing with herds owned by three Murphy brothers: Thomas, Patrick and Francis.

It was during evidence about the bank account that Murphy’s lawyers clarified their case, which until that point had only been implied, in questions, suggestions and intimations.

“It is consistent,” Mr Kearney said, “with one man being in that bank lodging money to both accounts, the same amount, on the same day.”

During a lengthy cross-examination, Mr Kearney explored every transaction, cross-referencing Murphy’s bank account with his brother’s, transaction after transaction.

Mr Kearney told the judges: “I’m saying that Patrick Murphy established this account, ran this account from inception until death.”

“And passed himself off as Thomas Murphy?” Mr Justice Butler said.

“And absolutely passed himself off,” Mr Kearney said.

“You’re saying the brother happens to open an account in the name of his brother,” Mr Justice Butler said, “and writes cheques ‘T Murphy’?”

“I’m saying Patrick Murphy is the person,” Mr Kearney said, adding later: “If the guards had in 2006 spoken to the bank staff, if they saw the CCTV, I’m explicitly making the case, they’d never have got Thomas Murphy in that bank, not on a single occasion.”

“I don’t think I’ve ever been to my bank,” Mr Justice Butler said. “What’s that got to do with it? One doesn’t have to go to one’s bank.”

The trial dragged on. The documentation piled up on the bench. “Sorry,” Judge O’Hagan said, pointing to more binders. “I won’t be able to see you.”

By day 13, a forensic accountant, who cannot be named, gave evidence having examined ledgers, cheques and cheque books, seized by Cab in 2006 during the search of a shed, owned by Patrick Murphy, on the Border.

For five days, Mr Kearney cross-examined, dealing mostly with the “most important exhibit” in the trial: an A4-sized ledger, with the words “Marked Gas Oil” printed in uppercase red on its blue cover.

Referred to as the “MGO book”, the ledger, the court heard, was a record of cattle sales and purchases, as well as expenditure on cattle feed and silage, from 1997 to 2004.

“The document does not lead you to conclude this is one big farming enterprise?” Mr Kearney asked the accountant, on the first day of his cross-examination.

On the second day, Mr Kearney suggested that the pattern of activity in the Dundalk account was “broadly consistent” with Patrick Murphy using it to run his cattle business”.

“I can’t accept that,” the accountant said.

“You won’t even accept the possibility?”

Mr Kearney: “You have misrepresented [the MGO book] to the court as money taken out of the farming business by Thomas Murphy, where any fair and impartial analysis would accept the reasonable possibility this being the record of money loaned.”

Accountant: “I don’t accept that.”

“You won’t even accept it as a reasonable or alternative possibility?”

The State’s final witness was the Revenue bureau officer, RBO35. His evidence was challenged by the defence. The challenge fastened upon the nine certificates RBO35 had signed in October 2006. They stated that, based on the records RBO35 had examined, Murphy was a chargeable person who did not file a tax return for the years 1996/1997-2004.

Mr McGillicuddy submitted that the certificates were inadmissible because RBO35 was “not acting in an independent fashion when his certificates acquired evidential status”.

The judges dismissed the defence’s application. The certificates could not “render the trial unfair”, Mr Justice Butler said.

According to Mr Kearney, the investigation was superficial. He asked RBO35 if, when he signed the certificates, he had presumed Thomas Murphy had opened the bank account in Dundalk.

Dealing with mart invoices, Mr Kearney said: “But you don’t know, and you didn’t know, whether he bought or sold cattle to marts.”

“Only on documentary evidence,” RBO35 said.

“But you now know that not a single mart manager or factory manager dealt with Thomas Murphy?”

“But you have no idea whether he did or didn’t?”

“You have no idea who brought the cheques to the bank?”

“No idea who made the withdrawals?”

“You had no idea that Patrick Murphy had a bank account in the very same bank?”

The defence introduced an exhibit: a statement of affairs, from December 2009, citing Patrick Murphy’s herd numbers, one of which, according to the document, was the herd number the court had previously been told was attributed to Thomas Murphy.

Later, in his closing speech, Mr Kearney would describe the prosecution’s next move as “the most spectacular own goal in history”.

The prosecution recalled Department of Agriculture official, Niall McKeown, who had told the court about a series of transfer of entitlements forms, dating from 2007 to 2009, which confirmed the transfer of Murphy’s herd to another herd number.

Here, in these documents, Mr Kearney said, was evidence of “a forger”.

Throughout the trial, Murphy’s lawyers had spoken of “a forger afoot in the case”. This forger, they claimed, was Patrick Murphy, who had signed documents in Thomas Murphy’s name.

To prove the forgery, the defence called its only witness.

Stephen Cosslett, a handwriting expert who in the 1980s trained with the British home office, told the court there was “strong evidence” Murphy did not sign a number of documents bearing his name. There was also “conclusive evidence” that the three transfer of entitlements forms were signed by the author of another set of documents, which were tax forms in the name of Patrick Murphy.

So who, in fact, was the chargeable person? Both counsel agreed this question was the crux of the trial. Was it Thomas “Slab” Murphy? Or was it his brother, Patrick?

Yesterday, seven days after the trial ended, the judges delivered their verdict.

“The court is satisfied beyond reasonable doubt,” Mr Justice Butler said, “that in each of the individual counts on the indictment the accused is guilty.”