French authorities are understood to have written to 33 witnesses 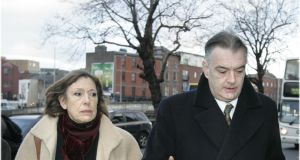 Ian Bailey’s partner Jules Thomas and Marie Farrell are among the witnesses whom the French authorities have asked to come to Paris next week to testify in Mr Bailey’s trial for the murder of Sophie Toscan du Plantier in west Cork, The Irish Times has learned.

Ms Thomas and her three daughters, Saffron, Ginny and Fennella all received summonses last Friday from the Cour d’Assises criminal court in Paris, requesting them to attend the trial due to start on May 27th of Mr Bailey for the murder of Ms Toscan du Plantier at her holiday home near Schull in December 1996.

The French authorities have no power to compel Irish witnesses to attend the trial and it is understood that neither Ms Thomas nor any of her three daughters intend travelling to Paris to testify in the case against Ms Thomas’s partner of over 25 years.

Meanwhile, The Irish Times has learned that Ms Farrell returned home on Monday from a trip abroad to discover that she also had been served with a summons by the French authorities, but likewise she does not plan to travel to France for the trial.

Ms Farrell originally identified Ian Bailey as the man she saw at Kealfadda Bridge near Ms Toscan du Plantier’s house in Toormore at around 3am on December 23rd, 1996, the night of the murder, and she gave that evidence for several newspapers in a 2003 libel action Mr Bailey brought against eight titles.

However, she subsequently retracted that statement and told Mr Bailey’s unsuccessful High Court action against the State for wrongful arrest in 2014 that she had been coerced by gardaí into making a false statement against him and that Mr Bailey was not the man she saw at Kealfadda Bridge (a Gsoc in 2018 cleared Garda Síochána of having coerced Marie Farrell).

Mr Bailey was twice arrested for questioning by gardaí about the murder of Ms Toscan du Plantier but he was never charged in Ireland in relation to the killing and has repeatedly denied any involvement in the killing or making any admissions about the death.

It is understood that the French authorities have written to some 33 witnesses – many of whom testified at either Mr Bailey’s libel action in 2003 or his action against the State in 2014 – requesting them to travel to France to testify in the murder trial.

Many live in west Cork and one witness who had been contacted told The Irish Times that they believed that many would not travel as they had to make their own travel and accommodation arrangements for which they would have to pay for upfront before being reimbursed by the French authorities.

“A lot of people weren’t happy at the short notice we’ve been given – we only got the summonses on Friday and we’re expected to organise travel and accommodation for just over a week away and some people actually would not have valid passports so it’s going to be a real challenge,” the person said.

“The other thing is that not everyone has the sort of money available to them to go and book their own flights and five nights accommodation in Paris – I know people will be reimbursed but it would have been far better if the French authorities had made all the arrangements and paid up front for people.”

Another witness in the case, who has not been called to give evidence, expressed surprise that the French authorities had not appointed a designated liaison person in Ireland some months back to contact witnesses and see what assistance they might need to travel to France.

It is understood those served with witness summonses are mainly civilian witnesses who gave interviews to visiting French police in October 2011 which were video recorded, but it also includes a small number of now retired gardaí who were involved in the original murder investigation back in 1996.

Ms Toscan du Plantier’s son, Pierre Louis Baudey-Vignaud issued an appeal at Mass in Goleen at the weekend to any witnesses who had received summons from the French authorities to travel to France to testify so that he and his family could “get justice for his mother”.