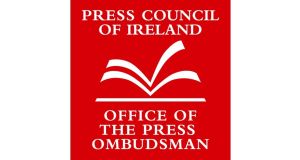 The Press Ombudsman decided to uphold a complaint by Mr Colm Keaveney that The Irish Times breached Principle 1 (Truth and Accuracy) of the Code of Practice of the Press Council of Ireland.

On 9 October 2018 The Irish Times published online a report in which it was stated that Mr Colm Keaveney was “bankrupt and unemployed” on a date in October 2017 when the Court of Appeal was considering a discovery order.

Mr Keaveney wrote to the editor of The Irish Times stating that he was “not bankrupt or unemployed at that time”. He asked what “appropriate measures under Principle 1.3 of the Code of Practice” did the newspaper intend undertaking. (Principle 1.3 states that where a significant inaccuracy or misleading statement has been published a retraction, apology, clarification, explanation or response shall be published promptly and with due prominence.)

The editor of The Irish Times responded to Mr Keaveney stating that he would correct any inaccuracies if Mr Keaveney could confirm when he exited bankruptcy and when he ceased to come under the restrictions of the Official Assignee. He also sought information on Mr Keaveney’s employment on the date referred to in the report. He also repeated a previous offer to publish an interview with Mr Keaveney.

Mr Keaveney wrote to the Office of the Press Ombudsman stating that he had no confidence that his complaint would be dealt with in an impartial manner by The Irish Times and that the information the editor sought was in the public domain and readily available in court documents.

The editor of The Irish Times wrote to the Office of the Press Ombudsman stating his willingness to correct any inaccuracies in the article the subject of Mr Keaveney’s complaint. He said that he sought information from Mr Keaveney on his bankruptcy and employment status but received no response.

Mr Keaveney in a submission to the Office of the Press Ombudsman stated that he was not unemployed or bankrupt on 13 October 2017 as “printed in The Irish Times” and sought a retraction and an admission of inaccuracy and an acknowledgement that he had not been contacted for comment as is “standard procedure before an article is published”. He declined the offer of an interview as a “remedy to his complaint”. He sought some “concrete proposals” in relation to the wording, content and context of how a “retraction/clarification/apology” might appear in The Irish Times.

The Irish Times reiterated its offer to correct the article and said that it had sought Mr Keaveney’s assistance in verifying the matters but Mr Keaveney did not respond.

As the complaint could not be resolved by conciliation it was forwarded to the Press Ombudsman for a decision.

The article stated that Mr Keaveney was bankrupt in October 2017. Mr Keaveney refused to provide the publisher with any confirmation of his bankruptcy status on the date in question. However, information on bankruptcy status is available to all on the Courts Service Online Bankruptcy Register. In other words, the publisher could have checked online Mr Keaveney’s bankruptcy status on the relevant date. Had The Irish Times done so, if it found that what had been published was inaccurate, it could have published a correction or clarification. Despite Mr Keaveney’s refusal to assist the newspaper the onus was on The Irish Times to check the publicly available record as it had published something as fact which was now being disputed. On this basis The Irish Times breached Principle 1 of the Code of Practice by not checking if Mr Keaveney was bankrupt in October 2017 when he informed the newspaper that he was not bankrupt on this date.

The Press Ombudsman had insufficient evidence to make a decision on another part of the complaint.

Mr Keaveney contested a statement in the article that he was unemployed on 13 October 2017. Confirmation of Mr Keaveney’s employment status was not available to The Irish Times. It is personal information that is not available on the public record and Mr Keaveney would have to agree to share the information with the publisher. He did not do so and neither did he offer to provide any confirmation of his employment status to the Office of the Press Ombudsman unless the Office agreed not to share that information with The Irish Times. On this basis, there is insufficient evidence available to make a decision.

Both the complainant and the newspaper appealed the decision to the Press Council of Ireland.

The complainant appealed the decision on the grounds that there had been an error in the Press Ombudsman’s application of the Code of Practice. At its meeting on 3 May 2019 the Press Council admitted the appeal for consideration and decided to reject it on the grounds that the Press Ombudsman had not erred in his application of the Code and it was reasonable and proper for him to consider the complaint in the manner in which it was considered.