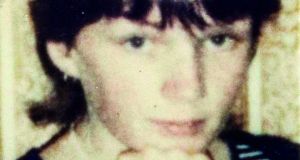 Ann Lovett: died after giving birth at the age of 15, in 1984. Photograph © The Irish Times

The daughter of Ann Lovett’s boyfriend has said the silence surrounding her death has been “an enormous burden on so many people”.

Vicky Langan, the daughter of Richard McDonnell, said she “struggled with the weight of knowing who the father of Ann’s baby might be but was paralysed by it”.

In The Irish Times today Mr McDonnell has spoken for the first time about Ann’s death, at the age of 15, after giving birth in a grotto in Granard, Co Longford, on January 31st, 1984. The teenager, who died in hospital later that day, was found by three boys walking home from school. Her son died in the grotto.

In a public Facebook post Ms Langan said she accidentally came across private correspondence belonging to her mother “that referred to my estranged father’s relationship with Ann Lovett”, along with a description of Ann’s death, two years before Ms Langan was born. “From then on, if I saw Ann’s name printed in a newspaper, my heart raced and my palms would sweat. I was overwhelmed with guilt, sadness and a profound shame.”

Ms Langan said the more she researched Ann’s death, “the more I became convinced of some manner of a cover-up”. “I struggled with the weight of knowing who Ann’s baby’s father might be but was paralysed by it. I was unable to process or suppress the contemplation of the senseless loss of Ann’s life, the tragic, lonely stillbirth of what might have been my half-brother, the suffocating atmosphere of the town closing ranks, the silence.”

On April 22nd, 1984, less than three months after Ann died, her sister Patricia, aged 14, died by suicide. “The silence surrounding this horrific tragedy has been an enormous burden on so many people,” Ms Langan said. “Three lives ended in a state of unthinkable desperation, and the trauma that stayed with those who cared about Ann and Patricia fuelled endless cycles of depression, alcoholism, self-harm, violence, self-destructive behaviour and sadly, suicides.

“Remains and after-effects of this trauma have embedded themselves into the generation that followed Ann’s and my father’s. I have not yet begun to find a way to rid myself of this unshakeable sadness, this internal rage in all directions.

“I am sure there are other young people my age connected to those in Granard who feel the same.”

“I want to thank Rosita Boland for her important reporting on this story and for her kindness and sensitivity over the past few weeks. She showed such care and dedication to the people involved in this story.”