‘I just love them’ - hundreds welcome British royals to Galway

William and Kate's itinerary includes a walk around Galway city 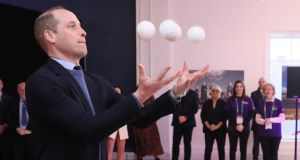 The Duke of Cambridge juggles during a special event at the Tribeton restaurant in Galway. Photograph: Brian Lawless/PA

Around 300 people gathered on the main street in Galway awaiting the arrival of the Britain’s Duke and Duchess of Cambridge on Thursday morning.

The royal couple is visiting the 2020 European Capital of Culture on the final day of their three-day visit.

Prince William and Kate Middleton were first visiting Tig Cóilí, a well-known bar in the heart of the city that is known for its traditional Irish music.

Standing in the crowd outside the venue, Angela Moran, who travelled from Westport, Co Mayo, stood holding a union jack flag with a picture of the couple on the front.

Buladh bos to the Royal couple playing Gaelic football and hurling for the first time#RoyalVisitIreland pic.twitter.com/dkDId0NuUP

School children cheering outside the Salthill Knocknacarra GAA club, where the royal couple will be visiting this afternoon #RoyalVisitIreland pic.twitter.com/H1F2fmiZ1m

“I just love them. They’re a fabulous couple. We even celebrated their wedding,” Ms Moran said.

“We went to our friend’s house and she had all sorts organised, including a red carpet. We spent a fantastic day in her house eating dinner and eating wedding cake.”

Anne Byrne, who was also in the crowd, travelled from Knock, Co Mayo to see the pair. “They’re just such a lovely couple. They’re so settled and so grounded. I admire them the way they work, the way they bring up their children. I just think they’re wonderful people,” she said.

The royal couple’s arrival to the bar was delayed due to foggy conditions preventing their helicopter from taking off.

However, they intend to continue with the planned itinerary which includes a walk around Galway city and watching a special showcase of Galway 2020 events and performances.

They will then conclude their visit to Ireland with a trip to the local Salthill Knocknacarra GAA club before flying home to the UK.

Nursing home residents expected to be allowed one visit a week 08:35
Covid-19: Hairdressers, gyms and religious services could return next week 08:21
Vicky Phelan considers move to US for experimental drug trial 07:52
Exiting Level 5: Ministers to push for reopening of shops, restaurants and churches next week 03:53
Demand that barristers repay Covid grants may be unlawful 03:10