HSE does not recognise PNA for ambulance personnel 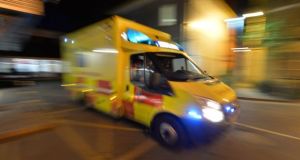 Hundreds of ambulance personnel are to stage a 24-hour strike from Friday afternoon.

The workers are members of the National Ambulance Service Representative Association (Nasra), which is a branch of the Psychiatric Nurses Association (PNA). The strike is set to start from 2pm.

The PNA, which said it had about 500 Nasra branch members (including paramedics, advanced paramedics and emergency medical technicians) has staged a series of strikes since the beginning of the year as part of a campaign to secure representation rights.

The HSE does not recognise the PNA or its Nasra branch as a representative body for ambulance personnel.

Meanwhile, staff in the HSE’s National Ambulance Service who are members of the trade union Siptu are to ballot for strike action in a dispute over the operation of a new payroll system.

The potential industrial action would involve ambulance personnel in Dublin,Wicklow and Kildare.

Siptu said last Monday that management at the National Ambulance Service had failed to rectify problems with a new payroll system.