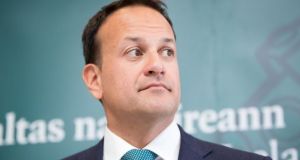 Leo Varadkar said while apologies had been made before it was important to get the wording correct for a formal apology in the Dáil in September. Photograph: Tim Honan

Taoiseach Leo Varadkar has said he is willing to meet women affected by the latest CervicalCheck controversy to discuss a future Dáil apology to them.

Mr Varadkar was speaking in Co Wexford after Minister for Health Simon Harris expressed regret that the HSE did not provide early information about delays in issuing cervical screening results to about 800 women.

The support group 221+ has said it has been told nothing about any forthcoming Government apology to the women affected.

Lorraine Walsh told RTÉ’s News at One:“For me this is a really important step for the women that are involved in this and the families.

Stephen Teap, widower of Irene Teap, said there was only one opportunity to get the apology right. “So engagement does need to begin, it hasn’t begun yet.”

Last week it emerged women did not receive their repeat screening results from US laboratory, Quest Diagnostics in Chantilly, Virginia, because of a computer glitch.

Mr Varadkar said while apologies had been made before it was important to get the wording correct for a formal apology in the Dáil in September. He was aware Mr Harris was currently talking to campaigners, and he would be available to meet with them if necessary.

“I think the IT glitch should not have happened.” He said patient representatives and Mr Harris “should have been informed much earlier”.