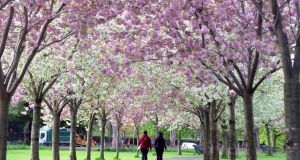 Cherry blossom trees in Herbert Park in Dublin, which has the highest population of such trees in the capital. Photograph: Aidan Crawley

Cherry blossom trees are being cut down in Dublin because they were planted in spaces too small for their roots, a leading tree specialist has said.

Herbert Park in Dublin 4 has the highest population of cherry blossoms in the capital, although a number have been removed in recent years. The tree species can also be seen in St Stephen’s Green, Trinity College Dublin and the National Botanic Gardens.

More than 7,000 trees of all varieties have been cut down by local authorities in the last 18 months, new figures show.

Joe McConville, the Tree Council of Ireland’s president, said inadequate planning had resulted in some cherry blossom trees outgrowing the location in which they were planted.

“If you go back to the early stages, in the 50s and 60s, when Dublin suburbs were being built and we were moving out of the Victorian and Georgian eras, there was more space around, so the streets were planted with trees,” Mr McConville said.

“The favourite tree at the time was the cherry but the problem with the cherry is they have a very large surface rooting profile. As the trees have grown, their roots, which are very close to the surface have expanded and twisted in public footpaths.”

The tree surgeon said Irish planners tried to emulate what the UK was doing with urban gardens in the 1930s. “It was well-meaning people who started a trend but it has resulted in these trees being in silly places. And over the past 10 years, lots of them are being removed.”

Mr McConville said due to the age of the trees, it is now too late to dig them up and replant them somewhere more suitable.

“They’ve a limited lifespan so they start to go into decline after about 50 years. We’re now 50 years down the road, the trees are now fully mature, they’re causing problems for the footpaths and they’re reaching the end of their useful life expectancy.”

Dún Laoghaire-Rathdown County Council intends to remove some cherry trees because they “have unsuitable rootstocks and are causing widespread footpath damage”, its tree plan states.