Government paid €112.4m to private hospitals in April and first week of May 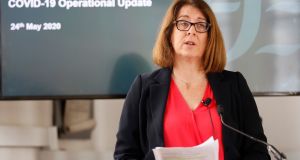 The Health Service Executive wants to retain most of the capacity it currently has in private hospitals under the controversial agreement reached between the Government and the independent sector during the Covid-19 pandemic.

The Government must decide this week whether it wants to extend the initial three-month arrangement until the end of July.

The Irish Times has learned that the State paid out €112.4 million to the private hospitals in advance payments to cover April and the first week of May under the current arrangement based on estimated costs submitted. The actual costs will be subject to verification.

The agreement saw the State effectively take control of 2,000 beds in nearly 20 hospitals as well as theatre and diagnostic facilities ahead of a feared surge in demand for care due to Covid-19. The deal has been criticised due to the cost and because significant numbers of private hospital beds remained unused.

Private sector consultants have maintained they have been effectively shut out of the hospitals in which they have traditionally practised and that this has affected patient care.

It is understood that the HSE, which has been reviewing the current arrangements, has advised the Department of Health that it would like to retain much of the additional capacity.

HSE chief executive Paul Reid said on Sundaythat any extension of the current agreement would ultimately be a matter for the Government but that from the HSE’s perspective, it needed to retain the capacity available. Minister for Health Simon Harris is to bring a memo to Cabinet on the issue this week.

A confidential Department of Health/HSE submission to the National Public Health Emergency Team earlier this month maintained that the Minister for Public Expenditure Paschal Donohoe would have to agree to any extension of the arrangement given the costs involved.

In a letter to TDs at the weekend, the consultants argued that the State’s takeover of private hospitals would lead to unnecessary deaths and illnesses and provide little value for money.

The letter signed by Stephen Frohlich – the managing partner of Critical Care Partners (a group of 15 anaesthetists and intensive care consultants in the independent sector) – forecast that unused capacity in private hospitals would cost the State €300 million by the end of June.

The Department of Health said that, under its agreement, a participating private hospital was due 80 per cent of its estimated monthly costs in advance from the HSE.

“Actual costs incurred are subject to verification . . . and any difference is subject to a balancing payment or clawback in the subsequent month. The HSE has made advance payments for April totalling €90.2 million and €22.2 million in the first week in May,” it said.

The department said this was based on estimates provided by the participating hospitals and that detailed information regarding payments to individual hospitals or hospital groups was “commercially sensitive” and therefore would not be published.

Coronavirus: One death, 25 new cases reported in State 18:11
Children who go abroad must self-isolate for 14 days before return to school in September 18:10
Angry Taoiseach calls for resumption of work on new National Children’s Hospital 17:56
Man tried to steal cars while high on crack and holding chihuahua 17:51
Judge gives landlord a week to halt Covid-19 parties near UCC 17:32