How to communicate long distance with aliens 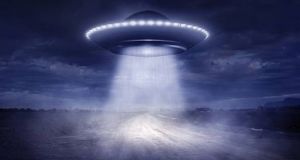 For the last 17 years since setting up his Kingsland Observatory outside Boyle, Co Roscommon, Eamonn Ansbro has been looking for extraterrestrial life.

It’s a pursuit that is easily to mock. Aliens of the popular imagination are green, with pointy heads and fly around in saucers. Their human pursuers are often similarly ridiculed.

Yet, in the last few years the discovery of thousands of exoplanets – planets around other stars – has made the search for extraterrestrial intelligence (SETI) a serious proposition.

The problem is that we do not know whether or not extraterrestrial intelligence exists and even if it does we do not know how they are communicating.

The biggest barrier is the distances involved. Even at the speed of light (250,000km a second), a message sent to the nearest star, Alpha Centauri, would take nine years to get there and back.

Dr Ansbro is advocating faster-than-the-speed-of-light communication, a potential discovery which would overturn the laws of physics defined by Albert Einstein.

“It is possible,” he says, “There have been theoretical models regarding this. There has been work done in the last five or six years to indicate that this is possible. Currently you are constrained by the speed of light.”

He speculates that while humans use 4D technology (ie radio communication), he believes extraterrestrial intelligence may be using something more advanced which is called quantum superluminal communications (QSC) or 5D. To borrow an analogy, human beings may be on AM while aliens may be on FM.

“We have no history behind us similar to say any of the other sciences and we are going on a number of assumptions. It’s a really high-risk project.”

But absence of evidence is not evidence of absence. Mankind has only very recently had the tools to even begin the search. New telescopes are being developed that will look for the tell-tale carbon signatures of life in the atmosphere of exoplanets.

At a lecture on Monday hosted by Astronomy Ireland, Dr Ansbro will explain the latest thinking on the possible nature of extraterrestrial life.

“The chances are pretty good for contact to take place,” he says. “The ultimate test will come from the exploration of extraterrestrial biospheres.

“ In what to us will be extreme planets, eg having a global ocean a hundred kilometres deep or much larger rocky planets than Earth with extreme gravity, our extrapolations will be tentative, but we can nonetheless envisage life in a range of habitats considerably wider than what we know on Earth.”