Abdulhamid al-Yousef lost 22 family members in attack, including his wife and twins 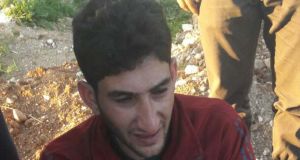 When Abdulhamid al-Yousef went to sleep last Monday night he thought his biggest concern was a Syrian jet that had been bombing nearby towns in northwest Syria.

By Friday, the 29-year-old shopkeeper found himself across the border in Turkey, an honoured guest of President Recep Tayyip Erdogan, whose forehead he kissed, surrounded by cameras and sympathisers, after a tragedy that blew his family apart.

Last Tuesday’s chemical weapons attack at Khan Sheikhoun in Idlib province, which provoked horror around the world and drew a military response from the United States, killed 22 members of Abdulhamid’s extended family, including his wife and nine-month-old twins. At least 86 people died in the suspected sarin gas attack, including many children.

“On Tuesday morning at exactly 7am I woke up to the sound of the war planes so I took my twins and my wife and we left the house right away to escape, because being in the house wasn’t safe. I felt something was wrong,” Abdulhamid tells The Irish Times.

“The second rocket was 300 metres from my parents’ house so I told my wife to take Ahmad and Aya and to get away from the house so that I could go and rescue my parents.

As he walked towards his parents’ home, he noticed people began falling down. “That’s when the breathing started to get difficult.”

Abdulhamid came across the body of his brother Yasser but continued trying to get people out of their homes. “After I rescued about 20 to 30 neighbours I went to my parents with my niece, and told them who had died, and I passed out. The sarin gas started to affect me more and more and was taking a lot of effect on my eyes. I had a shortness of breath, there was a kind of dust or sand on me,” he says.

“Then I asked someone where my wife and children were. When I left them they were alive, they were fine. They said they didn’t know. In the evening, they were found in the shelter next to our house. Ahmad and Aya and my wife and four others. Foam was coming out of their mouths and noses.”

Like dozens of other victims, Abdulhamid’s family were buried under concrete blocks in a hastily-dug trench. Wearing a wine-coloured jumper, grey pants and slippers, he sat for a time on the edge of the trench holding his lifeless twins – their blonde and brown hair matted, their bodies wrapped in white linen cloth. Two men in bare feet lowered the bodies down.

Though chemical agents have reportedly been used more than 60 times during six years of brutal war in Syria – by the regime, jihadist and other opposition groups, according to the investigations by the United Nations, governments and press organisations – the images of the dead at Khan Sheikhoun were especially harrowing.

A source at Syria’s foreign ministry denied Damascus has ever used chemical weapons in any attack, blaming “armed terrorist groups, co-operating with or under the cover of a number of regimes in the region and outside it”, according to state news agency Sana. But for some, the American Tomahawk missile strikes on the government’s Sharyat airbase last Friday morning gave hope to those facing the daily threat of attacks from the air.

According to Raed Fares, a well-known media activist who visited Khan Sheikhoun on Friday to take the testimonies of survivors, the strikes are a positive development. “Finally, after six years, someone punished Assad for an action,” he said. “But I don’t think this puts Bashar al-Assad in trouble because I don’t think these air strikes will continue. Trump will stop this.”

The fact that the Syrian military responded so soon after Washington’s first missile strike indicates it is unperturbed by the US attack, even as Washington’s envoy to the UN warned of possible further strikes.

For Abdulhamid al-Yousef, the reality of life without his wife, his twins and much of his family is only setting in.

“The hatred and crimes that killed my children, my neighbours . . . I have to make my presence known and extend the message of what happened to those people, to my children, my family,” he says.

“I wish all this could stop.”