How safe is Glasgow? Buckley disappearance is the exception

Going out in Glasgow no more dangerous than anywhere else, says expert. Rate of violent crime has dropped dramatically, though sexual violence has increased 4% 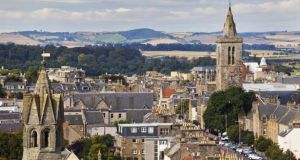 Glasgow is a relatively safe city. The disappearance of Karen Buckley is the exception, not the rule.

“Going out in Glasgow wouldn’t be any more dangerous than it would be anywhere else,” an expert on crime in Glasgow told The Irish Times.

“It is fair to say this is a very unusual event. The way we can tell this is the amount of media attention it has received.”

The leafy West End, where Ms Buckley was last seen in the early hours of Sunday, is generally seen as one of the city’s safer areas.

Violent crime in Glasgow has fallen in recent years. Glasgow’s murder rate has more than halved from 39 in 2004-2005 to 18 last year.

Similar drops have been recorded for attempted murder, serious assault and possession of an offensive weapon.

From 2013 to 2014, Glasgow had 1,538 reports of serious violent crime, which include serious assaults and robberies.

Edinburgh was the second most violent city in Scotland, with 17 incidents per 10,000.

Experts and police officers have long linked high levels of violence with deprivation and the social problems it causes, including drug and alcohol misuse.

However, sexual crimes have been on the increase in Glasgow. In 2014, there were about 24 sexual crimes for every 10,000 people in Glasgow, up 4.4 per cent from the previous year. Rape and sexual violence centres have said the true figures may be considerably higher.

Police Scotland have stressed they are treating the disappearance of Ms Buckley as a stand-alone incident. Currently they do not believe it is linked to other live investigations.

There have been recent serious incidents near the Dawsholm Park area where Ms Buckley’s handbag was discovered.

In February, a 24-year- old woman was raped in the early hours of the morning as she walked home.

She was forced into the driveway of a disused premises and attacked near Killermont polo club, a short distance from Dawsholm Park.

In the 1990s, there was a spate of abductions and murders across Glasgow involving young women, mainly prostitutes. Of 10 murders recorded only three led to convictions.