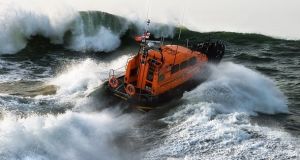 The Irish Coast Guard has warned that gale force winds could impede the search operation for the missing fisherman. Photograph: RNLI/Nigel Millard

Hopes have faded for the rescue of a missing fisherman whose boat sank several kilometres off Hook Head, Co Wexford.

The Irish Coast Guard on Monday night said the search for Willie Whelan (41), was now categorised a “search and recovery operation”.

He was one of the two men aboard the Alize which went down shortly before midnight on Saturday. The alarm was raised after an emergency radio beacon from the boat was activated and a search operation was launched by the Coast Guard.

Rescue 117 located one of the men, Joe Sinnott (65) from Kilmore Quay, unresponsive in the water about four nautical miles off Duncannon, and airlifted him to Waterford Airport. From there he was taken by ambulance to University Hospital Waterford, where he died sometime later.

Mr Sinnott will be laid to rest on Wednesday following noon Mass at St Mary’s Church in Kilmore, Co Wexford. Mourners are asked to donate to the RNLI in lieu of flowers. He is survived by his wife Mary and children Michael, Siobhán, Bernie and Bridget.

Our volunteers heading out to resume the search this morning. Tough search conditions, stay safe out there, thinking of the families at this sad time @DunmoreEastRNLI @KilmoreQuayRNLI @naval_service @IrishCoastGuard #Rescue117 @RNLI pic.twitter.com/j43hG03EtI

The Irish Coast Guard extended its “deepest sympathy to the Sinnott and Whelan families and to the wider fishing community”.

The Coast Guard said it would continue to support gardaí and the Marine Casualty Investigation Board with the ongoing search and investigation.

The search is expected to resume on Tuesday, but may be affected by bad weather. The LÉ Ciara has been the on-scene co-ordinator and two units of the RNLI and Rescue 117 have been taking part. The Waterford-based Coast Guard helicopter, Kilmore Quay and Dunmore East RNLI units co-ordinated by the Ciara conducted a search of the target area on Monday. Shoreline searches were conducted by Fethard and Kilmore Quay Coast Guard units.

Taoiseach Leo Varadkar spoke to Coast Guard director Eugene Clonan on Monday morning and thanked him and his teams for their work searching “in exceptionally difficult circumstances off the Wexford coast”.

“As the search continues, our thoughts are with the family and friends of the missing fisherman and those of his bereaved colleague,” said Mr Varadkar.

“I am very conscious of the brave service provided by the Coast Guard’s staff and volunteers right around our coastline. I also acknowledged the vital assistance of the RNLI, the Civil Defence and other volunteers in this search,” he said.

Green Party MEP Grace O’ Sullivan said the sea can be a “cruel friend”. “Through my work on the fisheries committee I have a lot of interactions with fishermen and fisherwomen. It’s a tough, tough life, and over the past few days that reality is on my mind as I think of the family and friends and community.

The search operation was first launched at about 10.30pm on Saturday when the radio beacon from the 12m fishing vessel automatically alerted Coast Guard personnel. The boat had been fishing for scallops six miles off Hook Head.