Higgins apologises to Irish in Australia for unanswered letters from home

President chokes up over ‘broken connection’ between separated families over years 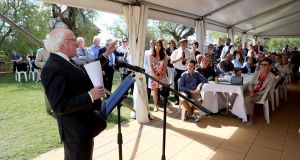 President Michael D Higgins addresses an Irish diaspora reception in Warwick, Queensland, that some of his relatives attended. Photographs: Maxwells

An emotional President Michael D Higgins apologised to Irish emigrants in Australia for the “broken connection” with family at home in Ireland and for letters that went unanswered.

Engagements on the second-last day of the President’s State visit to Australia struck a deeply personal note as Mr Higgins met scores of distant cousins, descendants of his grandfather’s brother Patrick and sister Mary Ann who emigrated to Queensland from Co Clare in 1862.

The Irish and Australian branches of the family caught up over a traditional Aussie barbecue at a wedding venue in Warwick, a town about a two-hour drive southwest of Brisbane.

Mr Higgins included the town on itinerary not just to meet his relatives but because it had been “neglected as a location for Irish emigration, particularly in the post-Famine period.”

Researching Irish emigration to Australia, Mr Higgins said the “most moving part” was finding fewer letters sent between the countries over the years, unlike correspondence between Ireland and the United States.

He offered a practical reason in a poignant speech: Letters were expensive to send, took as long as eight months to arrive and people did not want share the “bad news” about deaths in their families.

“So it is incredibly important this visit of an Irish President to be able to say that I am sorry for that broken connection with all those families,” Mr Higgins said, choking up, as he spoke to about 200 people in the Australian sunshine.

“They must have really felt: ‘What is happening back in Ireland? Have we lost connection?’ Equally in Ireland I do know from personal experience and talking to families that they often wondered to what happened to their families away in Australia.”

Earlier, the President had laid wreaths at the graves of his grand-aunt and grand-uncle in a cemetery filled with the graves of natives from counties Clare and Limerick.

Patrick and Mary Ann Higgins, from Ballycar in Newmarket-on-Fergus, arrived in Queensland about the ship Montmorency in 1862. Patrick was 22 and Mary Ann 23. He worked as a ploughman, rising from farm worker to eventually owning his own farm.

He married Bridget who died in childbirth, aged 37, having their 10th child. He remarried to a widowed mother of four and the couple went on to have a further five children. They had 19 children in all.

For the President’s relatives, this “re-bonding of Irishness” - as Mr Higgins put the family reunion and his entire State visit to Australia - was a happy moment.

“It is marvellous,” said Sister Gabrielle Ryan from Brisbane, great-granddaughter of Patrick. “Meeting him is the culmination of my research. I don’t have to go any further now. I can rest.”

Sister Ryan (77) discovered the link to the President’s family in 2001 when she called his brother John at the family farm in Ballycar.

Beyond a vast spread of food that included Guinness-marinated beef and “Shamrock Salad,” Peter English, Patrick’s great-grandson, laid out a detailed family tree that stretched down a long table.

“And there’s a lot more,” he said, attributing the genealogical investigation to his 95-year-old mother Cecelia who could not attend due to ill-health.

“We are excited. If you were related to the President, you would be over the moon,” said Therese Saville, Mary Ann’s great-granddaughter. She still possesses a statue her ancestor brought on the ship from Ireland.

Tracy Dobie, mayor of Warwick, said Irish emigrants may have been drawn to the town because the agricultural land in the area was similar to that of Ireland.

“This is huge for us,” she said. “It is just fantastic to have a head of state to come to regional Australia and regional Queensland. We don’t often have visitors of the President’s stature come through our region.”

Kevin Higgins, the President’s nephew and a far more recent arrival in Australia, also attended. He emigrated to Sydney in 1996 and like Patrick in 1862 was aged 22 and left from the same family farm in Co Clare.

“It was very significant to stand at the grave and see the different generations through,” he said of the visit to the cemetery with his own son. “It was nice, a lovely moment of quiet reflection.”