‘They send a lot of gobshites out here now’: The emigrant divide in Australia 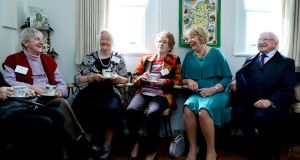 Eugene Naughton used to write a letter home to Co Meath once a month from Australia. If he wanted to talk to relatives, he had to plan – weeks in advance – a phone call to the local post office at home for a Saturday night.

Now Naughton (79) said the social media that the new emigrants rely on to stay in touch with people at home has created divisions between the young and old in the Irish communities in and around Melbourne.

Without the support of younger Irish emigrants, this has complicated life for the Irish Australian Support and Resource Bureau – where Naughton is one of the organisers – and the work that it does helping the old, the vulnerable and the isolated Irish emigrants in the state of Victoria.

“They are not connecting with the people that are here because they are socially connected on their iPhones,” said Naughton, who emigrated to Australia 53 years ago.

“We desperately need young people to come up and take our place. It is the only way it will carry on. We are getting old. . . I struggle to do email.”

Welcoming President Michael D Higgins to the bureau in Northcote, a thriving neighbourhood of Melbourne, last week, Naughton bemoaned the breakdown between the generations of Irish emigrants.

“Changing times bring different challenges. Many young Irish families in the community now rely on high-tech communications, like most people do, but the personal face-to-face contact is diminishing,” he said.

The bureau was founded in 1978 by a group of Irish men and women to help newly arrived Irish emigrants and others in the Irish community in need of support.

It works with the Irish Embassy in Canberra and is funded partly by €107,000 a year from the Department of Foreign Affairs under the Emigrant Support Programme.

Explaining what they do here, the bureau’s president, Owen Fitzsimons, said: “A whole range of things.”

He lists off a few examples: “Backpackers, people losing their passports, people getting in trouble, people jumping over a wall and banging their head off the ground and dying – we make sure they get back home.”

The bureau also helps out with citizenship applications and queries about pensions among other things.

A Link to the Hearth

Phillis McGrath (82), after whom the bureau’s club is named, started the bureau in the 1970s when the two bodies of Co Meath men with no family in Australia lay unclaimed in a local church. She arranged their burials.

Using money from the sale of a house left to her by an old man, she bought the bureau’s premises in Northcote.

Now, to bridge the gap between young and old emigrants, the bureau has started a programme called “Nasc Teaghlaigh” – translating roughly as “A Link to the Hearth” – through which grandparents in Melbourne whose own families have moved on could become surrogate grandparents to younger emigrants.

The bureau is hoping to engage a psychologist next year to help families who feel anxious because their only family support is in Ireland.

They suffer from what Naughton called “the tyranny of distance”.

Most of the organisers at the bureau are “Ten-Pound Paddys” who emigrated in the 1950s and 1960s, funded by the low-cost tickets offered by the Australia government under the “Populate or Perish” policies.

Over cups of tea and scones with staff at the bureau, the President talked about how every wave of emigration from Ireland is different but each migrant experiences the same “sense of strangeness”.

“Things aren’t quite the same as they were at home. Relationships may have come and gone,” he said.

He praised the bureau’s work in filling a void. At a reception for the Irish community in a downtown Melbourne hotel, Mr Higgins called on them to support the important work of the bureau.

There are about 16,000 Irish-born people in the Melbourne area and the state of Victoria, who are among the 2.4 million Australians who claim Irish ancestry.

There have been two types of new arrivals since the economic crash of 2008-2012: Highly educated graduates and tradesmen. They have brought new challenges to the community.

“It has changed a lot,” said Fitzsimons, who left Dublin at 16. “They send a lot of gobshites out here now. I am serious about that. All they think about doing is going to the pub, getting pissed and getting in trouble.

“Years ago it was mostly families and all that. But then when the recession came in Ireland, they came out.”

Phillis McGrath calls some of these recent Irish emigrants “bludgers” – Australian slang for scroungers. They arrive in Australia with not enough money to support themselves, she says, and the bureau steps in to help them.

Eugene O’Rourke (76) said that many Irish come out at Christmas time when the weather is warm and “they have one too many and they forget where they are”. There are drownings, car accidents, other tragedies.

A native of Leitrim, O’Rourke, who emigrated in 1971, said he would like to see more of the younger Irish emigrants become involved in the community “and not just in their own little clique where they stick together”.

“They don’t get involved with anything else and we find that tragic,” he said. “We are all in it together. We help each other.”

Anne Toner (87), who emigrated to Australia in 1950, misses Ireland all the time, she says. She plays her Irish CDs during the day.

She comes to the club every Tuesday to meet friends. A regular visitor home to her relatives in Ireland and the UK, she said her final goodbyes on her last trip home.

“I just said goodbye to everyone because I knew I would be pushing it,” she said.

“It wouldn’t be fair going on and visiting them . . . my family might feel responsible for me.”