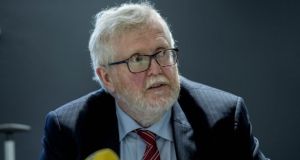 Dr Kevin Kelleher, assistant national director of the HSE said on Tuesday that healthcare workers ‘have such a work commitment that they come in regardless, sometimes, of their own health status’.

Healthcare workers reporting for duty while sick during the Covid-19 pandemic is a “big problem”, but is “in the Irish healthcare worker’s psyche”, a high-ranking health official has said.

It comes as the Minister for Health Stephen Donnelly warned that all workers should stay at home if they have any symptoms of illness.

Dr Kevin Kelleher, assistant national director of the Health Service Executive (HSE) said on Tuesday that healthcare workers “have such a work commitment that they come in regardless, sometimes, of their own health status”.

However, in the current circumstances, actually having an infection and having the symptoms of an infection should mean that people do not come into work. That is a big problem because that is not in the Irish healthcare worker’s psyche,” he told the Oireachtas committee on Covid-19.

On Tuesday night, Mr Donnelly warned that workers “should not go to work, no matter where you work, if you are ill”.

“Our healthcare workers have done extraordinary work throughout this pandemic and they are incredibly dedicated, but they should stay at home if they have symptoms,” Mr Donnelly said. “There is no judgement, and you should not feel guilty for catching this virus of feeling unwell.”

It comes after unions warned on Tuesday that healthcare professionals had been coming into work despite exhibiting symptoms of coronavirus infection because they were worried about losing out on overtime and other supplemental payments.

Speaking at the Oireachtas Covid-19 committee, Dr Kelleher said the issues is “a big problem for us . . . because there has always been this great element of the Irish healthcare worker’s approach that he or she comes into work when they are not well enough.”

Unfortunately we have got to bridge that significant cultural issue as a consequence. It is a problem for us with this,” he said. The Irish Medical Organisation also warned in a recent paper submitted to the committee that adequate rostering arrangements must be put in place to cover workers who are absent with the virus, or are excluded as potential close contacts of a case.

“Given the [healthcare worker] culture of working when ill - staff going to work while symptomatic with Covid-19 because of their perceived obligations to their colleagues and weak exclusion policies in some workplaces - contributed to larger outbreaks,” the group wrote.

Dr Kelleher said a “big cultural change” was needed in the health service, and that higher levels of absenteeism may need to be tolerated in order to suppress the virus in the healthcare system. “I do not mind an absenteeism rate of six per cent or seven per cent if we are stopping people with infections coming into hospitals to infect other workers in the hospital system or patients. It is a difficult thing to get over,” he said.

Earlier on Tuesday, Lynda Sisson, national clinical lead in workplace health with the HSE, told the committee that a lack of awareness of social distancing, or the capacity to do so, had helped the virus spread, along with the presence of asymptomatic patients within the hospital system.

“The other piece that we have noticed was the inability or the lack of awareness around social distancing in our hospitals in the very beginning . . . Some of our hospitals don’t lend themselves to physical distancing,” she said.

She said that as the pandemic progressed, the health service introduced several measures which curtailed the spread, including the introduction of Covid and non-Covid treatment pathways, and the closing of canteens.

The trade union Siptu told the Oireachtas committee that some healthcare workers may have failed to declare symptoms of coronavirus to their employers out of fear of losing additional overtime or premium payments they relied on if they had to self-isolate for 14 days.

Siptu said it did not have details regarding the numbers involved.

the policy of the Department of Public Expenditure and Reform of not including overtime and premium payments to those health workers who had to go on sick leave was “wrong”.

“The point of putting (this assertion) into the submission was to draw attention to the fact that this was a policy that did not work because it served as a disincentive.”

The Department of Public Expenditure declined to comment on Tuesday.

Anne Marie Hoey, the HSE national director of human resources, said that the service “would not be aware of as being an issue” that healthcare workers attended work while sick in order to preserve their income. “The public health advice was very clear in relation to staff and their responsibility to isolate when they became unwell.”

Asked about whether top-up payments should be made to those off sick in order to disincentivise attendance, she said that it was an “issue for the wider public and civil service . . . it does come back to a public pay policy issue and the Department of Public Expenditure are the lead in that regard.”