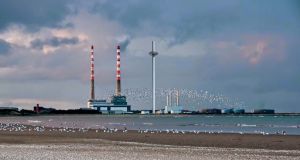 A computer-generated image of what the tower may look like.

Developer Harry Crosbie has proposed that Dublin City Council builds a lookout tower similar to the Guinness Store House at the Poolbeg towers.

Mr Crosbie, who was the first to develop Dublin’s Docklands, has met Dublin City manager Owen Keegan and ESB managing director Pat O’Donoghue about situating a lookout, which he believes would become a tourist attraction near one of Dublin’s best known landmarks.

He also contacted Marks Barfield Ltd, the firm who designed the London Eye and Brighton 360. He has also spoken to Julia Barfield, one of the partners in the firm, who agreed to work with him to develop a scheme for Dublin.

Mr Crosbie said he has already identified a site directly under the chimneys.

The site is owned by Dublin City Council which is seeking a partner to restore the listed buildings.

Mr Crosbie said that if he can get agreement in principal, he will seek international finance to develop a lookout tower.

He envisaged that visitors to Dublin will access the site by river ferry and it will open one of the city’s best known landmarks to tourism once the towers are painted and restored.

He added: “This will give the city an attraction to rival the Guinness Storehouse. When restored and repainted they will proudly reclaim their rightful place in the skyline of our beautiful city.”

Mr Crosbie is seeking public feedback on the feasibility of such a plan. “If the public reaction tells us they don’t want it, it will be dropped.”