Hand sanitiser Q&A: Should send my child to school with a bottle? 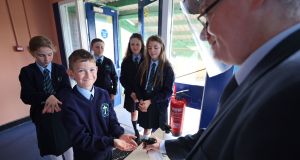 What’s this I read about the dangers of hand sanitiser, I thought it was a good thing?

Oh, it is a good thing and one of the key – one of the only, truth be told – weapons we have in the fight against Covid-19. However, concerns have been expressed in recent days about the alcohol content and presentation of some products particularly when in the hands of young children heading off to school for the first time in six months.

Great, another thing to worry about. Who has expressed this concern?

The National Poisons Information Centre (NPIC) based in Beaumont Hospital. In a Facebook post over the weekend it asked a simple question. “Would you send your child to school with a naggin of vodka?”

Of course not, why would they even as that?

Yes the NPIC warns that even small amounts of hand sanitiser if consumed can lead to INTOXICATION (their caps). The social media post also points out that some hand-sanitiser bottles look like water bottles and may be mistaken for a drink and it expresses concern that “toy-like novelty hand-sanitiser containers may appear attractive to children and their contents easily ingested.”

Are they suggesting the kids will drink the stuff? Have they ever tasted it?

It is vile tasting all right but the NPIC is still erring on the side of caution. It is true that consumption of it would pose a risk for a young child even if it is not one, perhaps, that many people will have considered until now. The Department of Education has also made it clear that young children should not have independent use of containers of alcohol hand sanitiser.

How did the warning go down online?

Not entirely well. Many parents posting on the NPIC’s Facebook post criticising it for being alarmist and are seeking actual evidence that children have been ingesting hand sanitiser and asking whether it has been a previously documented problem. Others said it was the parents’ responsibility to teach their children not drink their hand sanitiser.

But my school is asking us to send hand sanitiser in with my child?

Many schools are doing that, even those who are saying they have sufficient stocks in school dispensing units.

So, what should I do?

Talk to your school and talk to your child. Obviously sending a very young child to school with a potentially toxic or liquid in an attractive container in the school bag alongside their lunchbox is probably not a good idea, particularly if the hand sanitiser is liquid and the bottle easily opened. But there is probably less risk if the hand sanitiser is a thick gel or foam and comes in a bottle that could in absolutely no way be confused with a drink. Make sure to avoid any gels that smell nice and this is one instance when the more toxic smelling and tasting the product is, the better.