Storm Francis: Risk of flooding and structural damage across country 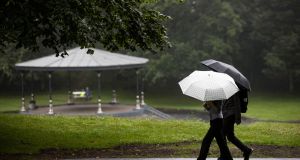 Southern counties are expected to experience particularly heavy rainfall in the next day or so. Photograph: Tom Honan

Heavy rain and strong winds on Tuesday could result in flash flooding, disruption and possible structural damage, the national forecaster has warned.

Met Éireann has issued an orange rainfall warning for Connacht, Cavan, Monaghan, Donegal, Wexford, Cork, Kerry and Waterford, while a yellow rainfall warning is in place in all remaining counties.

The warning is in effect from 9pm on Monday night until 5pm Tuesday evening.

“Intense rainfall” is expected at times on Monday night and on Tuesday, with rainfall of between 40 and 60mm expected. However, that could be higher in mountainous areas.

The heavy rain means that flash flooding is likely, while elevated river levels may result in river flooding also.

Meanwhile, a yellow wind warning has been issued for Munster, Dublin, Wexford and Wicklow from 6am on Tuesday, with “very windy or stormy conditions expected”.

Wind will reach mean speeds of 55 to 65km/h and will bring widespread severe gusts of 90 to 110km/h, and possibly higher in exposed areas.

Some disruption is likely and structural damage is possible, Met Éireann said.

The Government’s National Directorate of Fire and Emergency Management (NDFEM) crisis management team met with the forecaster on Monday morning and the NDFEM advised local authority severe weather assessment teams to “actively monitor” forecasts during the period of unsettled weather and to consider activation of crisis management, where necessary.

The NDFEM said trees are in full leaf, with the potential for a number of trees to fall blocking roads and damaging power lines. ESB Networks are preparing for power outages with staff on standby to repair faults in all areas.

The crisis management team has called on members of the public to avoid coastal areas for the duration of the warnings, and to be aware of hazardous travelling conditions.

Meanwhile, the Road Safety Authority (RSA), has urged motorists to drive slowly, particularly in counties which have orange warnings.

The authority has called on drivers to avoid driving through flooded roads and to “expect” road conditions to change quickly in high winds.

Liz Coleman, a forecaster with Met Éireann, said Storm Francis won’t be as windy as last week’s Storm Ellen, but that rain will be extremely heavy.

“With this event, it’s really the intensity of the rainfall which is more our concern. It’s not as much of a wind event which we saw with Storm Ellen last week. That’s really where we want people to take caution. The intensity of that rain can be quite treacherous in terms of driving conditions,” she said.

“The population wouldn’t be expecting this kind of weather through August so people really need to heed how impactful a warning can be at this time of the year.”

Ms Coleman said the impact of the rain will first be felt in the southern counties and as it tracks across the country, it will bring quite intense rain to Connacht later on Tuesday.

“It’s going to be heaviest in the southern part of the country from 9pm on Monday until 6am, but then in parts of Connacht the intensity will happen later from tonight and then into the day until 3pm tomorrow. Connacht will be feeling the intensity of it during the day time,” she said.

Ms Coleman added that the heavy rainfall could result in river flooding around the country.

The unsettled weather is likely to continue after a brief hiatus on Wednesday. Thursday and Friday are also likely to be exceptionally wet days with heavy thundery rain expected on Thursday and showers on Friday.

The forecast for the weekend is for drier, calmer conditions over next weekend with sunny spells and well scattered showers. However, it will be cooler than recently.

August is normally a wet month, the second wettest in Ireland climatologically, but Ms Coleman acknowledged that the weather has been “quite active” due to a tropical cyclone season in the Atlantic.