Tractors sold online for up to €20,000 by fraudsters posing as Irish company 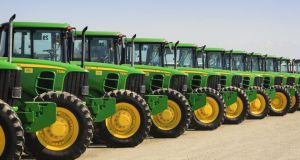 The fraudsters’ use of a website selling what detectives have dubbed ‘ghost tractors’ was just one example of a wide variety of frauds of they been involved in. Photograph: iStock

Gardaí are investigating fraudsters who used a website pretending to be that of an established Irish company selling agricultural vehicles to steal thousands of euro from unsuspecting customers.

A number of tractors valued at almost €20,000 each were paid for through the website. However, the money went into bank accounts controlled by the Irish-based fraudsters. The cash was quickly withdrawn, usually the next day, and has never been recovered.

The people who had paid the money waited for their tractors to be delivered before eventually realising they had been conned.

The company the buyers believed they had bought a tractor from exists and has traded reputably for many years. However, while it has large premises where tractors and agricultural plant can be viewed and bought, it has never had a website.

The fraudsters exploited the company’s absence from the internet and effectively passed themselves off as the company through a fake website.

The fraudsters’ use of a website selling what detectives have dubbed “ghost tractors” was just one example of a wide variety of frauds of they been involved in. They have used Irish bank accounts to receive the cash from unsuspecting online buyers.

Also being offered for sale online by the gang were luxury watches, some valued at close to €50,000, and nights in non-existent Airbnb accommodation.

Det Supt Michael Cryan of the Garda National Economic Crime Bureau is leading the investigation into the Romanian gang involved. The bureau believes the group is a loose coalition of approximately 90 people with a nucleus of about a dozen, most of whom are based in Ireland or have been based here.

Det Supt Cryan has travelled to The Hague as the key Garda member for operational meetings between the Irish and Finnish authorities, along with police officers from other European countries, and Europol and Eurojust.

The Romanian criminal gang under investigation begins its frauds with the creation of fake passports and ID cards for a range of European countries. These, combined with faked utility bills linked to Irish addresses, have been used to open bank accounts in Ireland and to open companies and create websites.

Almost 100 bank accounts have been identified in the Republic, without about €1.5 million passing through those accounts in the past year.

Gardaí found what they believe was a “false ID factory” at one of the Dublin addresses. Computers, a printer and laminator and other items needed to create fake ID documents were found along with 20 fake identity cards and passports.

A man arrested during the Dublin searches, and who was still being held in custody on Wednesday night, is believed to be the man featured in many of the ID documents. His arrest brings to 11 the number of people detained in Ireland as part of the international operation. There have been three arrests in Finland.