Man (29) to appear in court over death of Limerick boxer 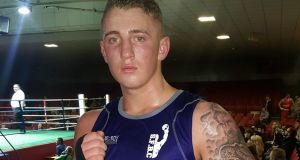 Kevin Sheehy died after he was knocked down on the Hyde Road in Limerick at around 4.40am on Monday. Photograph: Ken Moore/PA .

A 29-year-old man is due to appear in court on Wednesday charged in connection with the death of boxer Kevin Sheehy in an apparent hit and run incident Limerick in the early hours of Monday.

The man and an 18-year-old were arrested in the Midlands on Monday night by gardaí investigating the death of the 20-year-old, who was struck by a Mitsubishi Shogun SUV on the Hyde Road in Limerick city at 4.40am on Monday. They were brought to Limerick for questioning on Tuesday.

Gardaí said a file on the 18-year-old, who has been released without charge, would be prepared for the Director of Public Prosecutions.

The SUV, which bore UK registration plates, was later recovered on the north of Limerick city near the Páirc na nGael GAA sports ground. Gardaí have forensically examined the vehicle.

It is understood that Mr Sheehy, who gardaí do not suspect was involved in criminality, may have been targeted deliberately after leaving a house on the south side of Limerick after “banter” and “slagging” between the parties there soured.

Gardaí on Tuesday confirmed that a second man, aged in his 20s, was hurt during the incident. He was taken to hospital but was not seriously injured and has since been discharged.

A postmortem was to be carried out on Mr Sheehy’s remains on Tuesday by Locum Assistant State Pathologist Dr Allen Cala.

Mr Sheehy had boxed for Ireland, and was a five time Irish champion. He was crowned heavyweight champion in the Hull Box Cup Championships last week.

In a post on its Facebook page, St Francis Boxing Club, of which the deceased was a member, stated that Monday was “one of the toughest days ever in the history of our club”.

The club opened up its doors to members overnight to “chat about this tragedy or just be around others that are feeling the same loss”.

“There is nothing to gain bottling up these feelings and emotions,” it said.

At a media briefing at Roxboro Road Garda station, Chief Supt Gerry Roche called for “calm” in the local community.

He was due to become a father in five weeks, and had set his sights on representing Ireland at the 2024 Olympics.

Chief Supt Roche said gardaí were carrying out house-to-house enquiries and gathering CCTV footage from the area, including from any premises Mr Sheehy may have visited.

Mr Sheehy, who was one of three siblings, is survived by his parents, Kevin and Tracey, his two sisters, and his fiancée Emma.