Greenhouse effect gets thumbs up from Dublin diners 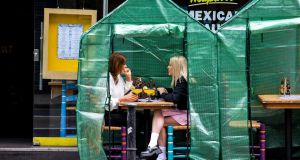 From left, Niamh and Sorcha O’Rourke from Dublin dining in one of the greenhouses at Acapulco, on South Great George’s Street, Dublin. Photograph: Tom Honan 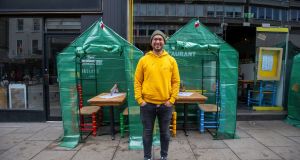 A popular Mexican restaurant in Dublin has created its own greenhouse effect to help customers eat al fresco through the cold and gloomy days of an Irish autumn.

The Acapulco restaurant on Dublin’s South Great George’s Street has positioned five collapsible greenhouses on the footpath outside the premises with each one able to accommodate two diners in a warm, cosy and impeccably socially distant fashion.

Acapulco’s manager, Shuey Bhuiuan, came up with the novel notion last week after spending days trying to figure out how he could keep his doors open in the face of fresh Covid-19 restrictions which allow restaurants to serve food only to outside tables.

“We had been closed in the early part of the week and I was sitting there just trying to work out how I might cope with the restrictions when I came up with the idea of greenhouses,” he said.

Space is at an absolute premium with room for only five or six tables on the footpath at the front of his restaurant so, with that in mind, he went in search of something very compact that might serve his needs.

He measured the space needed for a table and two chairs and found little greenhouses in B&Q that he thought might work. He bought two and trialled them before going in search of more.

There were none to be found in Dublin. “I had to go up to a B&Q in Newry where there were four for sale. I bought them all,” he said.

“They cost €60 each and had paid for themselves after the first day,” he said.

“The feedback has been amazing and it is has been really nice to see smiles on people’s faces again,” he said. “They can see that we are open and trying to trade as normally as possible,” he said.

He expressed gratitude to Dublin City Council for allowing restaurants such as his to use public footpaths for tables at least for the next six months.

Diners certainly seemed delighted by the development, none more so than Sorcha O’Rourke from Donaghmede who was having Sunday lunch with her sister. “I think it is brilliant,” she said. “It is really cosy and really cute and I absolutely love the fairy lights on the inside of our greenhouse.”

She said they had tried a few other restaurants in the city centre before happening upon Acapulco. “There aren’t many restaurants with an outdoor space and you can’t make a booking so we were struggling to find somewhere to eat but we thought we would check here as it is my sister’s favourite restaurant.”

She was thrilled with the decision and said sitting in the cute and cosy cocoon had made her “feel like I am on holiday. It is just lovely and everyone is stopping to take our pictures. We are going to be famous,” she added. “We’ll be leaving a big tip for sure.”