GRA has not advised members how to vote on pay deal 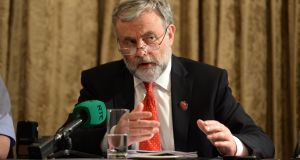 Siptu president Jack O’Connor. He set a deadline of Thursday next week for the Government to announce that new pay talks would go ahead. Photograph: Dara Mac Donaill

The leadership of the Garda Representative Association (GRA) has not advised its 10,500 members of how to vote on a pay deal recommended by the Labour Court to avert a threatened strike.

The national executive of the association, which represents rank and file gardaí, could have recommended the acceptance or rejection of the deal, worth some €40 million annually. However, as it did last year with the Lansdowne Road Agreement, it has not told members how they should vote in a ballot on the pay offer.

The ballot papers are expected to be sent to members on Monday, and the results of the vote are expected by November 28th.

The Association of Garda Sergeants and Inspectors (Agsi) and the GRA agreed last Thursday night to call off a 24-hour strike set to begin the next morning after the offer was made. Agsi is to recommend that its members vote in favour of the deal and there is confidence in Government circles that they will do so.

However, there has been anger within the GRA about how last week’s threatened strike was handled, especially the association agreeing to ask about 800 of its members to work on the day of the strike so as not to compromise State security.

It is feared that dispute, coupled with the absence of any increase in core pay in the offered deal, may influence GRA members to reject the deal.

Siptu president Jack O’Connor called on the Government to convene new talks by the beginning of February. He set a deadline of next Thursday for confirmation that such talks would go ahead.

He said if there was no such announcement Siptu’s national executive, which is scheduled to meet that day, would authorise any group covered by the Lansdowne Road Agreement to ballot for industrial or strike action if it wished to.

Siptu represents about 60,000 workers in the public service, mainly in the health, local authority and education sectors.

Mr O’Connor signalled that in any new talks Siptu would be seeking for its members to receive more than the €1,000 they are scheduled to get in September of 2017 under the terms of the Lansdowne Road agreement. “We need to face up to the face that things have improved [and] that trends have been set.”

He also said he rejected the notion that the Government was facing a choice between putting in place pay rises for public servants or funding improved services for the public.

“This is an absolutely false dichotomy. The fact of the matter is that the Government made choices in the budget. For example, it decided to continue to gift business in the hotel and hospitality sector with special VAT concessions costing more than €600 million per annum at the taxpayers’ expense. They chose to do so despite the fact that the industry has fully recovered.”

He said even at the eleventh hour it was not too late for the Government to amend the Finance Bill to generate additional revenues to facilitate negotiations on a new public service pay deal.