GPO celebrates its 200th anniversary with performance and stamp

Customers in the GPO are treated to a play, written by Colin Murphy, as the famous Dublin landmark celebrates its 200th anniversary. Video: Ronan McGreevy 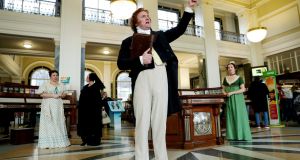 Sir Edward Lees (Rory Nolan), and behind, Mrs Draper (Camille Ross), The Widow (Mary Murray) and Lady Jane Lees (Liz FitzGibbon) at a specially commissioned performance from theatre company Fishamble to mark the 200th anniversary of the GPO in Dublin.

The GPO on Dublin’s O’Connell Street was around for almost 100 years before the Easter Rising and has been around for nearly a century since.

It took four years to build, was opened in January 1818 and is the oldest working post office in the world.

Prior to its creation, the GPO had lived a peripatetic existence, moving from Fishamble Street in Dublin to Sycamore Alley and a house opposite the Bank of Ireland in College Green, before finding its permanent home in what was then Sackville Street.

It was opened in the middle of the 19th century, in the days before stamps or post boxes came into common usage.

Delivering the mail was then a dangerous occupation and mail coachmen were frequently at risk from highway robbers.

The GPO was designed by the architect Francis Johnson who also designed Nelson’s Pillar, which stood outside on O’Connell Street until it was blown up by the IRA in 1966.

It remains one of the finest buildings in Dublin and its distinctive portico survived the worst shelling of Easter Week, 1916.

The Easter Rising rebels paid it a back-handed compliment by occupying it instead of Dublin Castle, which was the centre of British rule in Ireland.

The Irish Free State rebuilt the GPO as a matter of priority and it was reopened in 1928.

On Thursday, the occasion of the 200th anniversary of the GPO was marked with a play by Colin Murphy performed by the Fishamble Theatre Company. It featured the actor Rory Nolan as Sir Edwards Lees.

Lees was Ireland’s post office secretary, a title he inherited from his father. He lived in the GPO in some luxury with his staff. His living quarters were a source of a scurrilous pamphlet at the time.

After a number of financial scandals, he was removed from his post in 1831.

The Sir Edward Lees character raised guffaws among an invited audience when he predicted both the GPO and Nelson’s Pillar would be around in 100 years and in 200 years time.

The bicentenary will also be marked with an exhibition in the main hall. And a free bicentenary postcard will be available to every visitor to the GPO during 2018.

An Post has also issued a stamp to mark the occasion.