Government will have to change plans for new HSE board 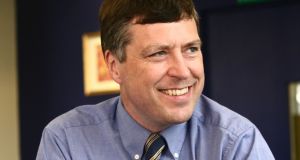 The Government last autumn appointed Ciarán Devane, chief executive of the British Council, to chair the HSE board.

The Government may have to change the composition of the planned new board of the HSE, even though it has already appointed the members.

Fianna Fail says the Government will have to revise its plans after the Oireachtas Health Committee voted to alter current proposals .

Health spokesman Stephen Donnelly said on foot of an amendment supported by the committee the Government will now be mandated to ensure the new board had members with clinical, financial, and patient advocacy expertise.

The Minister for Health Simon Harris in January appointed eight members of the new board.

The Government had last autumn appointed Ciarán Devane, chief executive of the British Council, to chair the board.

Mr Donnelly said the amendment he put forward on to the committee on Wednesday provides for one patient advocate, two clinical experts and one financial expert to sit on the HSE board along with four other members.

“The current board, recently appointed by the Minister does not, as far as I can determine, appear to include anyone with a medical background.”

“”We need a health service where nurses, doctors, midwives and all allied health professionals are given a say. It’s not asking too much for two out of eight board members to have medical expertise. Likewise patients, who should be at the heart of the system, need to be represented at management level.”

The Department of Health did not reply to questions on the issue of the HSE board on Wednesday.

1 Chairman of Fáilte Ireland resigns after it emerged he is holidaying in Italy
2 Urgent report on Dublin eviction ordered by Deputy Garda Commissioner
3 A million trees, including 400,000 oaks, to be destroyed this week
4 ‘It was pitch black’ - Rescued teenager describes night afloat with her cousin in Galway Bay
5 Inside the O’Brien Fine Foods factory in lockdown Kildare
Real news has value SUBSCRIBE