Gorse fire under control after sweeping across 350 acres in Cork 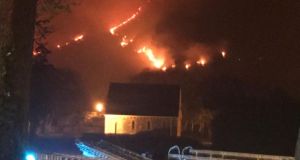 The fire stretched from north Kerry to the Beara Peninsula in West Cork, crossing more than 350 acres of forestry and destroying upland wildlife and nests. Photograph: Bantry Fire Brigade

Fire crews have been stood down in Gougane Valley, Co Cork where gorse fires ripped through acres of land overnight.

At least 50 firefighters were deployed to tackle the blaze which stretched from north Kerry to the Beara Peninsula in West Cork, crossing more than 350 acres of forestry and destroying upland wildlife and nests.

The fire burned close to one popular local tourist hotel in the area.

Neil Lucey, of the Gougane Barra Hotel, says the fire posed a serious threat to public safety and destroyed picturesque scenery in the area.

The hotel manager told the Patricia Messinger show on C103 FM that locals could hear sheep screaming while trying to escape the fires on the mountains.

“It was scary last night. You could hear sheep and other animals in the valley as well and that was shocking. We think of flora and fauna, we think of farmland but the fire was heading straight for them [the animals] and that was it. We have no idea what the damage is there. We know that there are thousands of acres damaged at this stage. Landowners are very concerned. The land is bone dry.”

Mr Lucey paid tribute to the fire services who worked around the clock to contain the blaze.

“It threatened households on the other side of the lake, there was a farm over there that the fire service were working with all night long. They were spraying down the farm buildings and they spent the night up in very awkward parts of the mountain. Macroom fire service, Skibbereen, Dunmanway and Bantry they all did trojan work last night.”

Meanwhile Teddy Creedon, chair of the Hill Committee of the IFA, told the show that farmers shouldn’t be burning gorse at this time of year.

“We can’t condone burning at this time of the year anyway to start off with. That is completely against the law. And no farmer should be burning. At the moment we are outside the dates. How it [the fire] started I don’t know.”

“Lets hope that the sounds [of animals screaming] were them getting out of the way and running for cover. Of course the solution for gorse is controlled burning done within the right time.”

Gorse is a plant with thick branches, prickly thorns and yellow flowers during the spring and summer. Farmers sometimes burn land to clear it of gorse in order to facilitate the regeneration of mountainous areas.