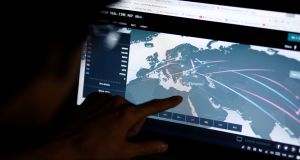 MSD said its computer network had been compromised as part of a global hack. Photograph: Erdem Sahin/EPA.

IT systems at the Irish operations of three international companies were affected by a major new global cyber attack on Tuesday.

US pharmaceutical company MSD said its IT systems had been “compromised” by the suspected “Petya” virus.

The company produces medicines and vaccines and employs more than 1,600 people at sites in Carlow, Cork, Dublin and Tipperary. It had a combined turnover in the State of €4.7 billion last year.

“We can confirm that the MSD computer network was compromised today as part of a global hack,” the company said in a statement which did not say exactly how the virus has affected operations. “Other organisations have also been affected. We are investigating the matter and will provide additional information as we learn more.”

UK advertising agency WPP, which owns JWT, Ogilvy & Mather and Young & Rubicam, and which has offices in Dublin, has also been affected.

Ukraine was at the epicentre of the so-called ransomware incident on Tuesday, which closely resembles the “WannaCry” attack in May, believed to have hit at least 150 countries where it targeted hospitals, governments and businesses.

The latest virus crippled websites run by Ukraine’s government as well as banks and power generators.

As the spread of the virus continued on Tuesday evening, Pat Moran, PricewaterhouseCoopers’ cyber lead in Ireland, said companies in the State needed to be vigilant ahead of potential contamination.

“It seems to have broken mid-afternoon and mostly in the eastern parts of Europe, ” he told The Irish Times.

“It’s the same level of risk and likelihood as we had around WannaCry and so organisations need to be vigilant.

“It is similar in nature to WannaCry in that it’s exploiting vulnerabilities in Microsoft [operating systems].”

Mr Moran said companies that had made the required amendments to their IT systems following May’s incident should be protected from the latest attack.