Give me a crash course in . . . the new BusConnects plans

Have the NTA’s latest designs addressed the issues with the bus corridor programme? 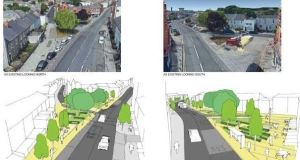 An example of NTA designs for BusConnects

What has led to the new BusConnects designs?

In stages, last year and early this year, the NTA unveiled its initial plans for the BusConnects programme, which would create 16 core bus corridors that would allow buses to zip into town without getting stuck in traffic. Unlike the current network of bus lanes, which end when the road becomes too narrow, these corridors would be continuous, allowing buses, for the first time, to maintain a dependable timetable in Dublin.

It’s fair to say that, for the most part, the plans bombed? Why? It sounds like a great idea

In theory it is. It would be hard to argue that Dublin doesn’t need a better service. The problem lies in those narrow roads, particularly in suburbs close to the city centre or in old villages that have been swallowed up by the metropolis. In many cases there is only one traffic lane running in each direction, and a solution the NTA put forward was to widen these roads to get extra traffic lanes. However, depending on location, this would require the removal of parking spaces, reductions in footpath width, and, most controversially, the annexing of parts of front gardens and the felling of trees.

So Nimby property owners kicked up a fuss?

BusConnects opposition was not confined to homeowners losing their driveways. Environmentalists were opposed to felling mature trees, architectural conservationists wanted historic walls and railings to be protected, and cyclists argued that the plans, which had been billed as providing much improved cycle facilities, made their lives more difficult and dangerous in some areas. Others were opposed to road-widening in principle, saying it would turn village roads into “motorways”.

These new designs have sorted all these problems out?

No. What the NTA has done is produce concept designs, which it stresses are works in progress, for a small number of the areas where problems were identified – namely Phibsborough, Stoneybatter, Inchicore and Kimmage, where it could see solutions to residents’ concerns. For other areas, it has yet to produce solutions. Perhaps because there aren’t any that don’t involve either felling trees or completely banning cars.

Is everyone happy with the changes that have been made?

No. While most people consider the new designs a considerable improvement, they do represent a compromise. In Stoneybatter, for example, motorists who would have driven directly from the North Circular Road to Manor Street would now be rerouted towards the Phoenix Park, where they will turn left down Infirmary Road and left again onto the quays from Parkgate Street. By turning left again onto Blackhall Place they will eventually get to Manor Street. They might, of course, choose instead to nip down a side street, such as Oxmantown Road, which would push traffic into small residential roads.

Over in Kimmage, the solution is to keep cars, buses and cyclists all in the one lane, but only allow “local” motorists access along 2km of the main route, by putting bus-entry-only points, ie bus gates, in place. Again, motorists may just use side roads. Also this does appear to be a significant diminution of a dedicated bus corridor.

So is this a fait accompli?

No, the designs the NTA has produced are just part of the full plans for the 16 corridors which will be available for public consultation in November. The NTA will also have to apply to An Bord Pleanála for permission before any route goes ahead.