Give me a crash course in... charities’ controversy

Ireland’s charity sector is in the news and, once again, for all the wrong reasons 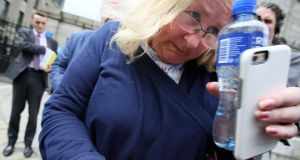 It’s a scandal Which one?

The charities one Which one?

That your man from Console got that €600,000 That wasn’t Console. That was your man at the St John of God Brothers, and it was perfectly legitimate.

So what’s this about Console? The suicide charity’s founder, Paul Kelly, his wife, Patricia, and their son, Tim, accrued almost €500,000 in salaries and cars alone from 2012 to 2014, according to an audit by the HSE.

Seven times? Why? He said it was because he was hit in the mouth by a client at a Console centre in Tralee. Then it was Limerick. But between them Paul, Patricia and Tim Kelly used 11 credit cards over 2012, 2013 and 2014.

What does that mean? Let’s spell it out. Over those three years Paul Kelly received consultancy payments of €218,586, a 2009 Mercedes CLS, costing €30,600 (fully expensed), plus what he spent on four credit cards. His wife, Patricia Kelly, received salary payments of €67,149, a 2010 Audi Q5, costing €57,000 (fully expensed), plus what she spent on four credit cards. You might have seen some of this on RTÉ’s Prime Time Investigates. Between 2012 and 2014 €736,000 was spent on Console’s credit cards. The three Kellys held 11 of the charity’s 20 credit cards. The spending on those 11 cards over three years was €464,777. And two of the cards Paul Kelly used were in the name of an employee who had left Console more than six years earlier.

Is that the nun? That’s the nun.

Loved that film, by the way. Audrey Hepburn was just stunning You’re that old? Sr Margaret Joyce was on secondment to Console from the Daughters of Charity to help people who were suicidal and families bereaved by suicide. The poor woman, who left Console in 2009, is a total innocent in all this. But, according to the HSE audit, spending on a credit card in her name came to €190,832 for 2012-15.

So is that the end of Console? Yes.

What about the service? They will be absorbed by one of the main Irish suicide charities. There are 49, most if not all of which are partly funded by the State.

Why is the State giving a few quid here and a few quid there to all these separate charities rather than providing one sound, solid, properly regulated service? You’ve got me there.

1 One hundred Irish retailers for all your online Christmas shopping
2 Covid-19: Backlog forces HSE to skip calls to thousands of close contacts
3 People who throw house parties can be fined €1,000 and jailed for up to a month under planned law
4 School ordered to reopen after closing due to Covid-19 fears
5 Minister urges objectors to Cork flood relief plan to stop legal action
Real news has value SUBSCRIBE