Gilmore pushes for US immigration reform at ‘critical’ time 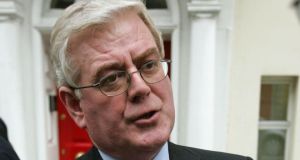 Tánaiste Eamon Gilmore said he had travelled to Washington to lobby US members of congress, particularly Republicans, at “a critical time” in the debate to introduce new immigration legislation.

The Minister for Foreign Affairs told reporters in between meetings with members of congress on Capitol Hill that the purpose of his two-day visit was to “seize” the momentum of contacts he made during his time in Government to press US politicians to support the proposed legislation.

A cross-party bill that would provide a legal pathway to citizenship for an estimated 11 million illegal immigrants, including 50,000 Irish, has passed the Senate in a bipartisan 68 to 32 vote but faces greater opposition in the House of Representatives where Republicans, who control the chamber, want any legislative changes tied to tighter border control.

“I’m conscious of the fact that we’re here at a time when the Republican party in particular are considering the detail of the legislation and how they’re going to handle it in the House of Representatives,” Mr Gilmore said.

Most of the Tánaiste’s meetings on the House side of Capitol Hill today were with Republican representatives, including Congressman Paul Ryan, Mitt Romney’s vice presidential candidate in last year’s White House election.

“I do understand that the immigration is a sensitive political issue in the United States and I do understand of course that getting legislation through the House of Representatives will be complex and will be difficult,” he said.

“I know that Congressman Ryan is in favour of dealing with the problem of immigration.”

Mr Gilmore said that during his meeting with Mr Ryan he noted the contribution that immigrants and Irish immigrants in particular had made to the economic and social life in the United States.

The Tánaiste said that he was meeting US politicians to “make sure that the interests of the Irish immigrants are being looked after” and raise the plight of Irish families who have had relatives living illegally in the US for many years and who cannot return home to Ireland.

“They can’t get back home for family funerals or for family events and they are living in a kind of twilight zone here,” he said.

The immigration legislation also includes new ‘E3’ working visas for 10,500 Irish visas a year, one of the few measures in the bill for a specific nationality.

Mr Gilmore met House minority leader Nancy Pelosi, a Democrat, and Congressmen Richard Neal, a Democrat, and Peter King, a Republican, both mebers of the Friends of Ireland Group in Congress.

He also met Senators Dick Durbin, a Democrat, and John McCain, a Republican, two members of the so-called Gang of Eight that drafted the bipartisan immigration bill.

The Tánaiste also met the chief of staff for House Speaker John Boehner, a Republican from Ohio, who said the “vast majority” of House Republicans believe they need to deal with immigration but that they’ll stake a careful, step-by-step approach to passing legislation.

Mr Boehner said that legislation to secure US borders and enforce immigration laws must come first and he stopped short of saying whether the House could ever agree to legalizing 11 million illegal immigrants.

The White House continued to ramp up political pressure on House Republicans yesterday. President Obama’s spokesman Jay Carney said that there was a broad coalition supporting immigration and that it was clear that the House realises that inaction was “not an option”.

The president, who views immigration reform as a key target of his second term, has urged Congress to pass a bill for him to sign into law by the end of the summer and not to miss the opportunity to tackle a decades-long problem that was last addressed by legislation more than a quarter of a century ago.

Republicans view immigration reform as essential if the party has any hope of regaining the White House given how a more powerful Hispanic vote helped guarantee Mr Obama’s re-election last year.