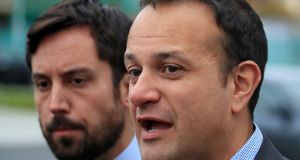 Taoiseach Leo Varadkar said it was a matter for the Gate Theatre to put in place procedures to investigate the allegations properly. Photograph: Collins

Allegations of sexual harassment at the Gate Theatre should be investigated “in the first instance” by the theatre itself, Taoiseach Leo Varadkar has said.

His comments come after a number of women who have made allegations of harassment by the former director of the theatre Michael Colgan said they will have nothing to do with an internal inquiry set up by the Gate.

A number of former female employees at the Gate have made allegations of bullying and sexual harassment against Mr Colgan.

Mr Varadkar also said it was important to realise that not all inappropriate behaviour amounted to bullying or sexual harassment.

Asked if there should be an independent investigation into the allegations of sexual harassment made against Mr Colgan, Mr Varadkar said the Gate was “a private body . . . It has its own board, it has its own trustees, so obviously in the first instance it’s a matter for the company itself to put in place its own procedures to investigate these allegations properly.”

However, Mr Varadkar also warned against accusation becoming the same thing as guilt, referencing the Crucible, a play about the Salem witch trials by Arthur Miller written at the time of the McCarthyite anti-communist witch-hunts in the US.

“I also think it’s important at the same time that we don’t enter the Crucible here. Allegations are allegations and they should be taken seriously but we shouldn’t always assume they’re true. And that’s why they need to be investigated.

He said from his experience, Leinster House was a safe place for women but added there were instances of “macho behaviour” in the Dáil.

Mr Varadkar had previously spoken of being shouted down in the Dáil, he said, though this was “largely perpetrated by men and women of Sinn Féin and the left, rather than men specifically.”

The National Women’s Council of Ireland (NWCI) has called for an independent investigation into the conduct and behaviour of Michael Colgan during his tenure at the Gate Theatre.

On Friday, the Gate announced it would appoint an independent expert to deal with allegations of misconduct, and asked anyone affected to contact them confidentially by email.

In response, several of the woman who have made allegations against Mr Colgan questioned the independence of an investigation “that is funded and administered directly by the Gate” and said they would not be contacting the theatre.