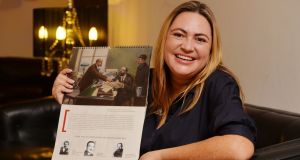 Few people can claim their great-great-grandfather’s actions changed the course of world history.

Fewer still can claim a direct family connection to both Vladimir Lenin and Joseph Stalin, two of the most significant figures of the 20th century.

Elena Alliloueva-Lorigan, who lives in Stillorgan, south Dublin, has an extraordinary link with the October Revolution which took place 100 years ago on Tuesday.

Her great-great grandfather Sergei Alliluyev sheltered Lenin at a critical time when he was the most wanted man in Russia.

Ms Alliloueva-Lorigan, who works for the charity ChildFund, has been living in Dublin since 2000 with her Irish-born husband Owen Lorigan. The couple met when he was a student at the Tchaikovsky Conservatoire in Moscow.

“As far as I know they are the only children with Irish blood who are directly linked to the Russian Revolution,” Elena says.

“If Lenin wasn’t safe in my family’s apartment, the entire course of history would have been totally different.”

In July 1917 Russia was in a state of foment. A provisional government had been formed following the overthrow of the Tsar in February 1917.

Lenin and his Bolshevik party led opposition to the government. In what became known as the “July days”, they were blamed for riots in which more than 300 people died on the streets of the capital Petrograd. The government believed Lenin was a German spy, a not unreasonable suspicion given that the Germans had facilitated Lenin’s return to Russia in April 1917.

At the most critical moment, with the police on his tail, Lenin was taken in by Alliluyev.

After a few days, it became unsafe for the Lenin to remain in the apartment. Lenin took Alliluyev’s coat. His colleagues shaved off his beard and changed his hair colour and before escorting him to a train station.

Lenin returned to seize power during the October Revolution (by the Russian calendar) which occurred on November 7th, 1917.

Lenin’s fellow revolutionary Leon Trotsky remarked years later: “If they (the provisional government) had managed to arrest him…in that case it was very probable there would have been no revolution.”

Alliluyev’s apartment at 10 Sovetskaya Street in St Petersburg is now a visitor attraction and the coat is in a museum in Moscow.

Jugashvili, the other man in the story, is better known by the name for which he became infamous - Joseph Stalin.

Outside the inner circle of the Bolsheviks, he was not regarded as a significant figure at the time of the Russian Revolution. “Stalin was a nobody. My great-great grandfather would allow Stalin stay in the apartment only if his children were somewhere else,” said Ms Alliloueva-Lorigan.

Nevertheless, Sergei Alliluyev’s daughter Nadezhada, known as Nadya, fell in love with Stalin as a 16-year-old teenager though he was 25 years her senior. The couple married a year later.

Hers was a tragic story. In 1932 her brother Pavel gave her a pistol for her own security. Instead, she turned the gun on herself after a row with Stalin in which she confronted him about his forced collectivisation of Russian farms.

Pavel is Elena’s great-grandfather. Many biographers state that Stalin blamed himself for his wife’s death and sought to make amends to the wider Alliluyev family.

He took Pavel Alliluyev into his inner circle. Pavel’s son Alexander (86) is still alive and practicing as a doctor in Moscow. He is Elena’s grandfather.

“My grandfather remembers sitting on Stalin’s knee. He remembers Stalin calling him a little mushroom. He met him many times,” she says.

“He allowed the small children to come to his residence and he got on very well with Pavel’s wife, my great-grandmother Eugeniya.”

Because of the connection with both Lenin and Stalin, the name Alliluyev is instantly recognisable to many Russians. Elena’s maiden name, Alliloueva, is a feminised version of the name.

“In Russia Nadya is seen as a tragic figure. She was a victim. People are genuinely interested to hear the story and they feel they relate to me personally because they know of my family.

“I kept my name because it is a significant name. When I was in my university I felt may be it happened once or twice that I got higher grades than I deserved.”

Ms Alliloueva-Lorigan is one of 6,000 Russian citizens living in Ireland. The number of people living in households with Russian as their first language is 21,707, enough to sustain a Russian language newspaper Nasha Gazeta. Most are from the old Soviet Union.

Now 39, she grew up in Moscow at the tail-end of the Communist system. “We were absolutely brought up to believe that Lenin was a very great human being and that he was eternally alive in the mausoleum [IN MOSCOW)],” she recalls.

“Every schoolchild had to wear a pin with Lenin’s face on it. I still remember he was born on April 22nd. Whatever you are taught in childhood is very difficult to get out of the system. All those things, they get into our head.”

Like many Russians, she is conflicted about the Russian Revolution.

“The cause wasn’t bad, but the implementation was awful,” she said. “You never hear it was wonderful or people saying it was the best thing that ever happened.”

Stalin’s affection for the Alliluyev family did not last. Pavel Alliluyev, a Red Army commissar, died in 1938 at the age of just 44 from poisoning, most likely as a result of Stalin’s purges.

In 1948 Stalin imprisoned Elena’s great-grandmother, her daughter Kira and and sister-in-law Anna. They “spoke too much,” Stalin said. Stalin’s daughter Svetlana Alliluyeva, who refused to go by her father’s name, attempted to intervene on their behalf. “If you advocate for them ever again, you’ll be prison too,” Stalin told his daughter. The three women were only released in 1954 after Stalin died.

Of Stalin, Elena says: “Everyone knows what he did. There is no point in going against the truth. Stalin has a lot to answer for.”

She despairs that many in Russia see Stalin as a hero, the man who saved the country from the Nazis, rather than the dictator who murdered millions of his fellow citizens.

Svetlana Alliluyeva was tormented by her father’s actions and eventually became an American and then a British citizen.

Ms Alliloueva-Lorigan does not feel any guilt by association. “No member of our family would defend him or deny anything that he did. There is no point in going against the truth.

“Because I don’t have blood relations with him I don’t have the strong feelings that Svetlana had. It was absolutely impossible for her after he died. She tried to escape from his reality. She was a very unhappy person.”