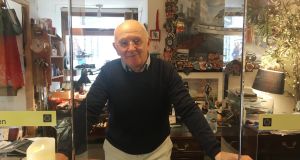 Jonathan Margetts of Thomas Dillon’s Gold Jewellery on Quay Street, Galway: 80 per cent of the summer sales have been lost due to the fall in US tourist numbers. Photograph: Amy Blaney

Normally, he would be doing so again this year, except they are nowhere to be found. Some 80 per cent of the summer sales of a store that opened in 1750 have been lost because of the fall in US tourist numbers.

“We are operating without our two part-time staff, and with reduced opening hours, but we are managing. It’s picking up,” Margetts says.

On a rainy day in July, the Claddagh ring with its unique design and sentimental appeal, is perched in a window display. Usually crowds gather outside but as The Irish Times visited on Tuesday just a single person stood to watch.

“We’ve been through it before, but never like this” says Margetts, who runs the store with his wife, Eleanor Coyne, adding that they opened their doors after the easing of the lockdown on June 20th only to find “a ghost town”.

Aran Island Knitwear on Quay Street was one of the few knitwear stores that reopened after the lockdown relaxed. Here, too, the striking absence of US tourists is being keenly felt. Sales are down by 70 per cent.

“A lot of the American tourists that visit would have Irish ancestry, and our jumpers represent their heritage. It’s like bringing home a little bit of Ireland to people back home,” staff member Mary Garrett says.

The third-generation store is going into its second week of business, and “sales are down”, she adds. “We are predominately tourist-based and this is hitting tourism hard. We need more support from the Government.”

In a city heavily dependent on tourism, several gift shops and tourist information centres have remained closed around the city until travel restrictions ease.

During the summer months, American tourists flock to the west for trips to the Aran Islands, Connemara and the Cliffs of Moher, and this loss has hit the hospitality industry hard.

Ann Marie Dowd, revenue manager of the Park House Hotel on Foster Street, Galway, says American tourists account for 80 per cent of their guests during the summer season.

“There are currently no American tourists staying in the hotel, and all booking from the States have either cancelled, or they are waiting closer to the time to cancel,” she says.

A large number of the US cancellations have been attributed to the quarantine guidelines. “They would usually stay two to three days and are great for booking tours to the cliffs, Connemara and the Aran Islands. They like to shop so they are a big loss to the city,” Dowd adds.