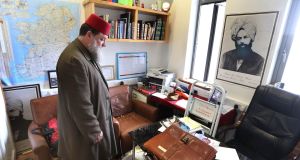 Politicians and community leaders gathered in Galway on Monday night in solidarity with the Ahmadiyya Muslim community following an attack on a mosque in city.

Windows and locks at the Ballybrit mosque were broken, furniture was damaged and CCTV footage was forcibly removed from the premises.

“This act of vandalism was committed by cowards,” said Cllr Alan Cheevers (Fianna Fáil). “I can assure you that this does not represent the people of the east side of Galway City. Today was a very upsetting day for me, to see the damage here. I will work tirelessly with the city’s Ahmadiyya Muslim community to make sure that this kind of thing never happens again.”

Gardaí launched an investigation into the attack which occurred sometime between 10pm on Sunday and 4am on Monday morning. Rocks were used to break the windows.

“This was a clear, deliberate, and vicious attack being delivered to our community. This gathering tonight is the best possible answer to such people, to show that they don’t speak for the Irish. They don’t speak for anyone in Ireland, for that matter,” said Imam Ibrahim Noonan, whose office was damaged in the attack.

“I think that’s what is important. I have been receiving warnings that the mosque was going to be attacked and that I should be careful about my own movements. I have never allowed such people to intimidate me, because I stand for everything that’s good about Ireland, as an Irishman, and I will not back down to such people.”

Joe Loughnane, of the Galway Anti Racism Network (GARN), said the mosque was also attacked in July 2017, when graffiti was daubed on the walls. He invited people to attend the solidarity gathering to show the Ahmadiyya Muslims that they were not alone.

“When I came here earlier, it was obvious that the people who worship here felt they were alone and under attack. We wanted to prove to them that this wasn’t the case,” said Mr Loughnane.

“People are coming here, drinking cups of tea, and trying to find out more about the Ahmadiyya Muslim community. This is a hate crime. In these situations, the community can come to understand that there is solidarity towards them.”

A member of the congregation who converted to Islam last year, Roscommon native Alan Kelly, said it had been a traumatic day for the community when word spread that the mosque had been attacked.

“Everyone was so was shocked. We didn’t know how this kind of thing could occur in such a peaceful country,” he said.

“The support we have received today from across Ireland has been amazing, but it is sad to think that there are people out there who want to cause destruction and spread fear without knowing anything about us.”