‘What are the intentions of the government?’ asks Prof Philip Alston 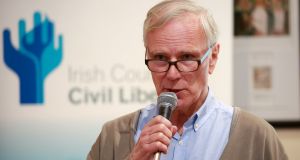 UN special rapporteur on extreme poverty Prof Philip Alston at the Pavee Point Travellers Centre in Dublin where he spoke about how surveillance technology is being introduced into social welfare systems around the globe. Photograph: Crispin Rodwell/The Irish Times

Philip Alston, a professor of law at New York University, said citizens should “think very carefully” about what private information should be made available and recorded.

“The issue is exactly what are the intentions of the government? In what ways are the future options constrained, and what sort of precautions and protections are being built in?”

The Department of Social Protection, which administers the PSC, says it is not a national identity card and nor is it a biometric card. Rather, the department says it is issued for the purposes of identifying people obtaining a service from the State.

However, Prof Alston said “governments around the world, when they get their hands on comprehensive datasets about their citizens, they’re going to find it very difficult to resist the temptation to use it in all sorts of ways and to cross-fertilise, or to bring together, to aggregate, all of the different data sets”.

“Health information, the infections you’ve had, the addictions that you suffer from, the psychological conditions that you’ve struggled with, your educational record, the highs and the lows, and many of your interactions with the police, with the courts system, your interactions with neighbours, your whole history, is potentially able to be added to a highly sophisticated, biometrically-based data system like this one.”

Speaking at the Pavee Point Traveller and Roma Centre in Dublin on Monday night in an personal capacity, Prof Alston called on the Data Protection Commissioner (DPC) to make public the report from her inquiry into the legality of the cards.

“Alarm bells would go off if the DPC report into PSCs is not made public,” the academic said. “If a report of this significance is not published then you could not justify the role of Data Protection Commissioner. I very much hope it will be made public.”

The event was organised by the Irish Council for Civil Liberties (ICCL) and Digital Rights Ireland, both of which have advocated against the introduction of the PSC.

The ICCL recently submitted a report on the PSC to Prof Alston for his upcoming report to the UN Human Rights Council on digital surveillance technologies.

The ICCL described the card as “a well-known Irish example of how technology can be used against people living in poverty”.

“The Government has created a digital check point where people must hand over their biometric data in order to put food on the table. It’s deeply unfair, because those required to get the PSC are least likely to be able to fight it,” Elizabeth Farries, surveillance and human rights program manager at the ICCL, said.

Ms Ferries added that the scheme “reproduces the stereotype that poor people will cheat the system”.

She claimed “the Government has created a digital check point where people must hand over their biometric data in order to put food on the table.”

PSCs were rolled out nationally in 2012 and are required to avail of a range of services including social welfare services, passport services, citizenship applications and student grant applications.

At the time of its launch, Joan Burton, the then minister for social protection, said the card would enable authorities to combat and prevent welfare fraud, and that it would expedite administration processes.