This year’s series brings theatre, music and an eye-catching hot air balloon to the city 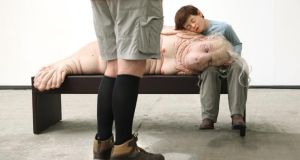 Windguru and other internet weather maps will be scrutinised in Galway this week as a 30m-long “Skywhale” prepares to take flight over the city.

The many-breasted hot air balloon designed by Australian artist Patricia Piccinini is one of the highlights of this year’s Galway International Arts Festival, which opens officially this evening.

The balloon was commissioned to mark the centenary of the Australian capital Canberra, and elicited a mixed reception due to its design and cost.

“Terrifyingly nipply” was one reaction on Twitter after its launch in May 2013.

It takes a good half-hour to inflate, and will be “tethered”, when not flying over South Park, Salthill Park or NUI Galway’s president’s lawn this week - depending on weather conditions.

Gallery doors opened yesterday evening, with the festival’s artistic director, Paul Fahy, having secured use of the Connacht Tribune’s former printworks in Market Street for the event for the second year in a row.

Theatre at the festival ranges from new work by Frank McGuinness and Amy Conroy to An Taibhdhearc theatre’s world premiére of Maum by Síghle Ní Chonaill.

The latter production is based on the Maamtrasna murders of August 1882 and stars David Heap.

Brett Bailey’s Exhibit B in the Black Box Theatre is a controversial confrontation of both colonial atrocities by European powers in the 18th and 19th centuries and the plight of immigrants today.

The RTÉ National Symphony Orchestra will play a weekend of orchestral and chamber music masterworks with conductor John Wilson, along with RTÉ Contempo Quartet.

The programme also includes comedy and “first thought” talks - with one discussion on European capitals of culture and Galway’s own bid for 2020.

Galway’s Mechanics Institute in Middle Street is the hub for this year’s Fringe festival, directed by Claire Keegan, which has an extensive range of activities for children as part of its programme.

More than 70 visual artists will exhibit in a “Galway City Gallery” the organisers have created across a number of venues, from Eyre Square’s snooker hall to the Headford Road shopping centre.

Busker Browne’s is hosting the Kirwan’s Lane theatre, with work by Seamus Scanlon and Valerie Ní Loinsigh among others on the Fringe programme.

Mandolin magician Tom Portman will release his new solo album on July 23rd in Seven, on Bridge Street, while Shop Street buskers James Gallagher and Joyce Redmond, Antara, and Laura Mulcahy are among performers in the Fringe music programme.

There is also comedy and cabaret, and an Irish Fringe assembly in association with the World Fringe.

The Westside Arts Festival, a community-based event, will run from July 15th to 18th, on the theme of “hope through the arts”.

Venues include Westside library, the Cinemobile and the local boxing club.