The former teacher, who had lectured in UCC for over 30 years, wrote many books on Cork’s history 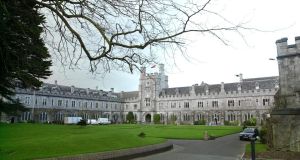 The funeral of Cork historian and educationalist Dr Sean Pettit who died unexpectedly at the age of 88 last week will take place on Monday.

Emeritus Professor of history at University College Cork (UCC), Prof John A Murphy said Dr Pettit was a very distinctive figure in Cork academic and public life whose presence would be sorely missed.

“He was a very good local chronicler and was rightly awarded a civic prize recently by City Hall who rightly saw him as someone who could publicise the history of the city for visiting dignitaries,” he said,

“He also did his PhD on the early history of UCC and that was very helpful to me when I was doing my various writings on the college so he was a man of great variety and very gracious.

“He was also a very good communicator and that was reflected in his popularity as a lecturer - particularly on matters of local history - he was very distinctive and will be a great loss to Cork.”

Originally a secondary school teacher, Dr Pettit lectured for more than 30 years at the Department of Adult Education in UCC where he wrote his definitive work This City of Cork 1700-1900.

The study, published in 1977, grew out of a series of weekly talks he gave on RTÉ Corkabout entitled Cork in the Nineteenth Century and a series of six lectures for the Adult Education Department in UCC.

The opening chapter of the book A Thousand Years of Living by the Lee, opens with an exhortation to the reader to get out and walk the streets and lane ways of Cork to learn fully about its past.

“A city is there to be appreciated and to be experienced. The best way to do so is to go out and about on the streets to see with one’s own eyes the shape, the colour, the texture of its houses, churches, public buildings, bridges, shops, railway stations, quays and places of industry.”

Former Lord Mayor of Cork, Cllr Tom O’Driscoll, also paid tribute to the late Dr Pettit whom he honoured at City Hall in 2002 in recognition of his work in promoting the history of Cork.

“I first came across him when I was doing a H Dip in Education in UCC in the 1980s but I really got to know him in 2002 when I was Lord Mayor and gave him an award for his walking tours of Cork,” he said.

“He loved Cork, and his expertise and his incredible sense of humour during his talks and walking tours really brought the history and character of the city to life.”

Dr Pettit, who is survived by his wife, ballet dancer, Aruba Coughlan, will be buried following 11am requiem mass at St Patrick’s Church, Lower Glanmire Rd in St Michael’s cemetery in Blackrock.