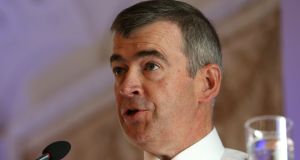 The plan, by Garda Commissioner Drew Harris, involves a reduction in the number of Garda divisions from 28 to 19. Photograph: Crispin Rodwell

Garda headquarters is braced for opposition from inside and outside the force to the most radical reorganisation of Irish policing in the modern era, due to be unveiled at an event in Dublin on Thursday.

One of the cornerstones of the plan, by Garda Commissioner Drew Harris, involves a reduction in the number of Garda divisions from 28 at present to 19. Implementation of the plan will begin immediately but is expected to take up to three years.

Because each Garda division currently has one main station as its headquarters, some nine stations across the country will lose that status.

Informed sources within Garda headquarters believe this will give rise to campaigns locally, led by politicians, seeking to save the status of their local station as a divisional headquarters.

“It will be perceived as a downgrade for those stations,” said one source, though he added no stations were earmarked for closure.

The Association of Garda Superintendents has made no comment in advance of the plans being unveiled. However, The Irish Times understands it is concerned that because divisions are being amalgamated, the number of superintendents’ posts will be reduced.

The association is concerned this will significantly impact the promotion prospects of its members, many of whom are young as they are relatively newly promoted. Superintendent sources also said while divisional policing pilot programmes were under way, they had been run for just six months and had not been assessed yet.

However, they point to the fact 33 inspectors have only just been approved for promotion to superintendent and a new competition for chief superintendents as proof the promotions system “is continuing and will continue”.

The Irish Times has learned there is “deep unease” across all of the staff associations – from those representing rank and file gardaí to chief superintendents – at what they see as a lack of consultation by Mr Harris over his reforms.

The same sources said the associations had been properly briefed on the plans only on Tuesday and Wednesday, adding the changes were presented as a fait accompli.

The new operational policing model will commence implementation from Monday and is expected to take up to three years to execute fully.

Under the plan to reduce Garda divisions in number from 28 to 19, each of the new divisions will be bigger and will have more resources, enabling them to be run like mini police forces.

For example, each division will have a cybercrime, sexual offences, economic crime capability meaning those resources will be available locally without the need to seek assistance from outside the area.

Informed sources said it was envisaged that the practice of Garda headquarters in Dublin “looking over the shoulder” of chief superintendents around the country, and even directing policing in the divisions from Dublin, would end.

All of the Garda’s specialist units – that deal with drugs, organised crime, armed and siege incidents and so on – remain unchanged. These will be available to offer assistance to senior personnel in the divisions when required.

However, because each division will be bigger and contain more personnel and specialist expertise, Mr Harris believes they can be run as autonomous mini police forces, with increased visibility by gardaí on the streets a priority.

Under the plan each division will be assigned more civilian workers, which will free up Garda members for frontline duties and inject specific expertise into the regions, including in the areas of human resources and finance.

Reducing the number of senior officers running policing at divisional level was also expected to free up the gardaí currently assigned to desk jobs to support those officers.

The plan is the clearest response since Mr Harris was appointed last September to the recommendations of the Commission on the Future of Policing in Ireland, chaired by former Boston police chief Kathleen O’Toole.

The commission reported almost 12 months ago and one of its main recommendations was that community policing be placed back at the centre of the Garda’s work nationally. Under the new plan, each chief superintendent running each division will be assigned four superintendents, with two of these running community engagement.