From Malin to Mizen and back: how much cable ESB replaced after Ophelia 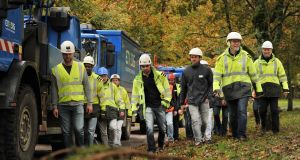 From Malin to Mizen and back – that’s how much conductor cable ESB Networks has replaced over the past seven days as repair crews worked around the clock to restore power to almost 400,000 customers affected by Storm Ophelia.

According to ESB Networks’ southern division manager Denis Cambridge, the storm, which hit the southwest coast on the morning of October 16th, led to the single largest mobilisation by ESB Networks crews in its 90-year history.

“We’re celebrating our 90th birthday this year in ESB Networks and Storm Ophelia gave us some birthday present, but the pride there has been in terms of company response and organisation response, it has been terrific in terms of serving the community,” he said.

“Undoubtedly the southwest bore the brunt of Storm Ophelia but nationally we reckon we had to replace up to 3,000 poles, enough conductor to run from Malin to Mizen and back and 200 transformers, and to do all that in six days is phenomenal,” he said.

In addition to the 3,500 front-line crew who were out checking for faults, clearing trees and replacing poles and broken cabling, there were a further 1,000 staff in various support roles including logistics, safety, materials procurement and securing accommodation.

The latter was required as in addition to ESB Networks staff being drafted into Cork from as far away as Donegal, there were also 500 staff from utility companies in Northern Ireland, Scotland, Wales, the Isle of Man, various parts of England and France brought in to assist in the emergency repair job.

“We focused initially on the lines serving large numbers of people and facilities – so we focused on hospitals and sewage and waste water plants so we got more bang for our buck in terms of resources and then we began working on the outages to smaller numbers of houses.

“By Tuesday night, our systems were telling us we had power back to everyone except 10 customers but we sent out crews to check and they had all been reconnected – it was a massive effort over the week and great credit is due to our staff and those from other utility companies that helped us.”