From cloud to cup – tracing the journey of Ireland’s water 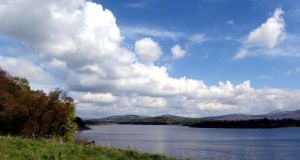 Poulaphouca reservoir in west Co Wicklow is one of the main supplies of water for the Dublin region. Photograph: David Sleator/The Irish Times

Water for Ireland’s needs falls initially as rain, but it travels a good distance from cloud to glass.

The Republic’s drinking water begins its journey as raw, natural water found in groundwater and in springs, rivers and lakes.

About 80 per cent of our drinking water is gathered from rivers and lakes, the remaining 20 percent from springs.

About 540 million litres of that water are consumed every day in the Dublin region. The main sources of water in the region are Poulaphouca reservoir in west Wicklow, the Vartry reservoir in east Wicklow, the Dodder river in south Dublin and an abstraction point on the Liffey at Leixlip, on the Dublin/Kildare border.

At the treatment plants raw water is screened to remove large items like sticks, fish and leaves.

Coagulant is added to the water to bind fine particles together. These larger, heavy particles are called flocsi. Sand and gravel filters are then used to remove the flocsi. Disease carrying micro-organisms, which are too small for the eye to see, are then killed during a disinfection process.

Because of its excellent disinfection and oxidation qualities, ozone is widely used for drinking water treatment. Other forms of disinfectant include chlorine or ultra violet light. The treatment plants also contain laboratories where samples of water are tested.

On Tuesday, Irish Water said “ a technical failure in one part of the disinfection process” at the Leixlip Treatment plant was responsible for release of untreated water potentially affecting 600,000 people. The authority issued the State’s largest ever boil water notice.

From the treatment plants water flows by gravity through large pipes called trunk mains to reservoirs spread across the city. Some of these are well known and include Saggart, Stillorgan and Belgard on the southside.

On the northside of Dublin there are Dungriffin in Howth, Sillogue Water Tower near Dublin Airport, and Malahide reservoir. Further north there are reservoirs at Jordanstown, Thomastown and Kilsough in the north county.

The distribution system is linked and the network is currently being “flushed” to eliminate the untreated water, but Irish water said that process could take a few days.