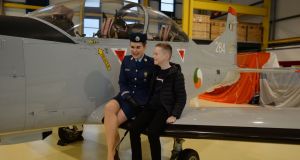 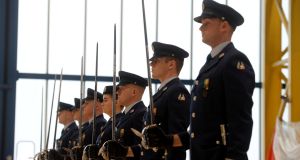 A female pilot has been commissioned into the Irish Air Corps for the first time in 15 years.

Lauren Cusack (26), from Donabate in north Co Dublin, becomes the sole commissioned female pilot serving in the organisation, with two other women among the many pilots to have left it in recent years.

The air ambulance service, on which she hopes to work in the future, was recently scaled back until the end of February due to staffing pressures.

Ms Cusack was one of seven new pilots commissioned into the Air Corps at a ceremony Baldonnel Airbase, Dublin on Friday. The 35th Air Corps cadet class started training in September 2016 and will begin work on Monday.

She said she grew up near Dublin airport and was “always obsessed with planes” but there was no military history in her family. She studied aviation management at Dublin City University, where some of her lecturers were ex-Air Corps members and gave her the idea to join the Defence Forces.

“So I applied in my last year of college and got in. I went from ballerina girly-girl to going to the Curragh, which was a totally crazy experience,” Ms Cusack said.

“The flying part has been absolutely amazing, it’s tough and you’re emotionally drained the whole time but [it is] absolutely fantastic, the best job ever.”

Even before her formal commissioning on Friday Ms Cusack has given talks in schools to encourage young girls to consider a career in the Defence Forces.

She said Friday’s ceremony — at which the new pilots took their oath of allegiance to the State and the Constitution in front of their families — was “the best day ever”. The pilots will receive their “wings” in February and Ms Cusack said she hoped to fly with the marine patrol and air ambulance services.

Defence Forces Chief of Staff Vice Admiral Mark Mellett said there was “no doubt” that retention of staff has been a challenge for the organisation.

“There are significant challenges, and we are addressing those challenges. The thing is you can never stop for a moment and say everything is fine. Pay is just one part of a number of strands which we’re looking at. It is critical to create an environment where people feel valued,” he said, adding that “there are many things we can do in terms of not overstretching people”.

He said the temporary reduction in the air ambulance service was “prudent” due to the numbers of pilots available. “My job at the end of the day is to deliver a level of service which is congruent with the resources I have available to me, within acceptable levels of risk.”

Minister of State for Defence Paul Kehoe said it was “fantastic to see a newly commissioned female officer for the first time in a long, long number of years”.