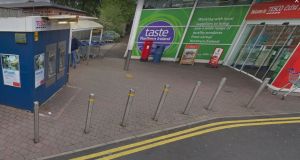 Thieves have stolen two cash machines from a supermarket in Antrim.

A digger was used to take the double ATM unit from the premises at Castle Way early on Friday morning.

PSNI Det Insp Richard Thornton said police received a report of the theft just after 3am and were told the digger was on fire.

“Officers responded and, approximately half an hour later, they successfully recovered the ATM unit in the Birch Hill Road area, just a few miles away,” he said.

“The public is waking up to the news today that criminals have targeted a community where many rely on this vital resource, and I understand the concern of the public and the business community, and the impact this crime will have on the community and the business itself,” he said.

Last month a cash machine was stolen from a health centre in Belfast, and attempts were made to take ATMs from Belfast City Hospital and a petrol station in Ballynahinch, bringing down down the forecourt roof.

Det Insp Thornton said police were investigating if the incident is linked to other ATM thefts.

He appealed to owners of heavy plant machinery to secure and immobilise equipment. “I would also appeal to the public to report anything suspicious to us. It is unusual to see a digger out on the roads in the evening or the middle of the night, so if you do see a digger on the road at these times and think something isn’t quite right, please contact us on the non-emergency number 101 and we can check this out,” he said.

“Also, if you see people or vehicles loitering in areas close to ATMs, particularly as some shops may be closed, or hear machinery late at night or in the early hours call us. If you think a crime is in progress please dial 999.

“In particular, if anyone has any information about this morning’s incident please call 101 and quote reference number 126 of 06/12/19.”

Information can also be provided by calling Crimestoppers on 0800 555 111.