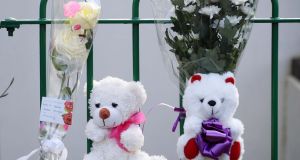 Neighbours placed flowers and teddy bears at the scene of an apartment fire in Cluainin Cronan in Clondalkin. Photograph: Colin Keegan/Collins Dublin 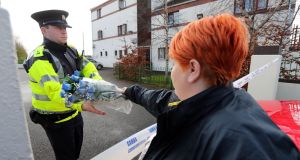 Flowers are left at the scene of an apartment fire in Dublin that claimed the lives of a woman and three children. Photograph: Niall Carson/PA Wire

Were it not for the firefighters, gardaí, reporters and cameramen outside the small apartment block in the Kilcronan estate in Clondalkin, Co Dublin, on Wednesday, the scene would have been idyllic.

In early spring sunshine, joggers, cyclists and dog walkers strolled along a well-used and well-kept path along the southern bank of the Grand Canal. Swans, ducks, coots and moorhens made the most of the water.

The apartments, a safe haven, step-down facility for between 18 and 24 months for women and children in fear of domestic violence, must have been close to heaven on earth for those living there.

But in the early hours of Tuesday, dense, choking black smoke filled a first floor apartment and left death in its wake.

Martin Healy, walking his cheerful two-year-old Jack Russell, Daisy, along the banks of the canal, said he saw women from the apartments regularly when he passed by, the mothers having a cigarette in the car park by the canal, farm fields on the other side.

“They’re lovely, lovely people, just minding their own business,” he said of them on Wednesday. “It’s an absolute horrible feeling to hear what happened.”

Two women friends of those who died and who came to lay flowers speculated about a mobile phone charger, but there was no authoritative confirmation as to cause.

Accommodation at the three-storey apartments at Cluainin Cronan, which were built in 2000, was administered by Sonas, the largest provider nationally of frontline services to women and children experiencing domestic abuse, with a concentration in the greater Dublin region.

Funded by Tusla, the Child and Family Agency, the Cluainin Cronan complex includes four flats and six houses. Fire alarms and smoke detectors had been inspected and passed, said a spokeswoman.

Several closed-circuit TV cameras survey all approaches to the apartments to alert those inside to any unwelcome visitors. Behind the flats is a secure garden and play area for children.

Among those staying in the apartments on Tuesday night was Annmarie O’Brien (27), who was expecting a baby boy shortly, and her daughter, Paris, aged two.

Visiting her from Shankill in south county Dublin was her sister Margaret O’Brien (30), known to family and friends as Biddy, and her daughter Holly and son Jordan, aged 4.

Two other children were also in the apartment.

The two other children in the apartment when the fire broke out were said last night to be recovering from smoke inhalation and their condition was understood not to be life-threatening.

On Wednesday, in the wake of the tragedy, the inside of an open window was jet black from smoke and there was also black smoke staining around an extractor fan outlet on a gable wall of the apartment.

By late morning, friends and neighbours were dropping by to pay their respects. Among them were Marie and Laura from Bray, Co Wicklow, who asked that their full names not be published.

“Annmarie was a lovely girl and a good mother,” said Marie, who disclosed an earlier tragedy in her friend’s life.

“Her brother went the same way – in a fire behind the church in Bray about seven years ago,” she said.

Sonas chief executive Fiona Ryan said the organisation’s sympathies and condolences were with the relatives and friends of the women and children.

“We are devastated by the tragic loss of life which occurred as a result of fire in an apartment in our supported housing complex in Clondalkin,” she said.

“Sonas is working with the relevant authorities on their inquiries. We are currently supporting other families in the apartment complex, including those unable to return to their homes because of fire damage, for whom we are sourcing alternative accommodation.”

“Like everybody, we are particularly shocked given the age of the young people. Our condolences go out to the entire community,” he said.

As news of the tragedy dominated news outlets, the first people to arrive to lay flowers, two teddy bears and three candles were Lisa Kinsella-Colman, a mother of four, and Roselyn Byrne, a mother of three, who live in Kilcronan Court.

Both women described themselves as “devastated” at what had occurred, and said they found it particularly difficult when preparing their own children for school after what had happened.

“Our kids are in school with other kids in the area. It’s very safe. I’m sure all these kids played together,” said Ms Kinsella-Colman.

Two other women who arrived at the complex in a taxi, accompanied by a three children and a man, were too upset to speak at length.

“I’ve just lost my best friend,” one said of Annmarie O’Brien, before indicating she was too emotionally upset to speak further.

An elderly man who lives locally, Tom Carty, said he regularly delivered food vouchers to residents of the apartments on behalf of the Society of St Vincent de Paul.

What had happened was an awful tragedy, he added.