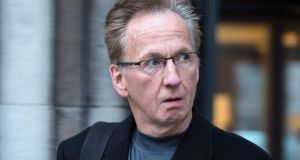 An Irish millionaire and his estranged wife have settled a dispute over a £500,000 (about €577,000) holiday home in rural Ireland after staging a “Titanic” divorce court battle in London, England.

Michael and Margie Hanley - who had lived together in Wentworth, Surrey - both wanted the house they jointly owned in the village of Cornamona, Co Galway, in their divorce.

Judge James Holman had analysed the evidence on the house at a public trial in the family division of the High Court in London over two days.

However, lawyers told him on Wednesday that an agreement had been reached which would see Ms Hanley become the owner of the Cornamona property.

The judge had previously said the couple would split cash and assets totalling between £10 million and £14 million in the wake of their marriage breakdown.

He said they had together run up lawyers’ bills of more than £800,000 on the “Titanic battle” - a figure he described as “phenomenal”.

Mr Hanley (60), who has retired after a career with multinational conglomerate GE, told the court that their 33-year marriage hit the rocks after he discovered that his wife had had an affair.

Ms Hanley (56), who denied adultery, said Mr Hanley had told her that she could have the house in Cornamona and was “punishing” her.

On Wednesday, the judge told them he was “very, very glad” that agreement had been reached.

“Obviously I regret it could not have been sooner and some of these massive costs saved,” he said.

“It has been very painful for me to listen to what really is a very sad story, because for so long you together achieved so much and I am sorry it has ended in the way it has.

“But in all events, you are on the threshold of new lives and I wish all possible happiness in those new lives.”

The judge heard that the couple had lived in Europe, the Far East and the US because Mr Hanley’s work had taken him abroad.

They had built the house in Cornamona about 16 years ago and had gone there for holidays and at Christmas.

Mr Hanley wanted it to be a retirement base.

Ms Hanley, who still lives in Wentworth, said she should have the Cornamona house because generations of her family had lived in the village.

The judge heard that there had been suggestions of Ms Hanley living elsewhere in Cornamona.

He also raised the possibility of the pair using the house at different times of the year.

But Ms Hanley told him: ”We are getting divorced. The village isn’t big enough for both of us.”

The judge had been scheduled to hear closing legal arguments from the couple’s barristers on Wednesday before making a ruling.

But a barrister leading Ms Hanley’s legal team told him that agreement had been reached.

Stewart Leech QC, for Ms Hanley, said that, under the agreement, his client would become the owner of the Cornamona house and the house the couple had shared in Wentworth.

Stephen Trowell QC, who led Mr Hanley’s legal team, said “everybody” was bound by the agreement.