Saliva tests would be easier for children to tolerate 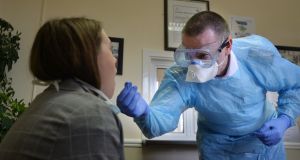 The current standard invasive test for coronavirus collects specimens from the back of the nose and throat. Photograph: Alan Betson

Less invasive tests for the virus causing Covid-19 could be introduced for adults and children, according to the Health Information and Quality Authority (Hiqa).

A new report by Hiqa said saliva or nasal specimens may offer a viable alternative to the current standard invasive test for the coronavirus which collects specimens from the back of the nose and throat.

Following a review of the latest evidence from international academic research, Hiqa said the taking of saliva or nasal specimens might be more acceptable in terms of comfort, particularly for children.

Hiqa’s deputy chief executive and director of health technology assessment, Máirín Ryan, said supervised self-testing where individuals take the swab themselves, may also be an option.

“This could reduce the risk of infection for healthcare professionals,” Dr Ryan said. Less invasive tests could be considered following validation studies by the National Virus Reference Laboratory and the Health Service Executive.

Hiqa said its review of academic research and evidence indicated the virus was primarily spread by contact and droplet transmission and that the relative importance of aerosol transmission – fine particles suspended in the air — was unclear and possibly restricted to specific contexts.

Dr Ryan said understanding the contribution of different routes of transmission was important to inform prevention and control measures.

“While spread appears to be primarily by contact and droplet transmission, the relative importance of aerosol transmission is unclear and is likely [to be] context specific,” Dr Ryan said.

She said such contexts for airborne particles were low temperatures or enclosed and poorly ventilated environments.

However, Hiqa said there was “limited, low-certainty evidence” that the virus could be transmitted via aerosols.

Dr Ryan said the latest evidence underlined the importance of adhering to a range of infection control measures, including face coverings, respiratory etiquette, hand-washing and maintaining a safe physical distance to reduce the spread of the infection and protect the most vulnerable members of society.

She said it also highlighted that while transmission from children to adults and to other children does occur in households and schools, the rates remained low.

A review of studies on the use of face masks by healthy people in the community found they may reduce the risk of infection. There was no evidence that they led to increased harm or a false sense of security, leading people to neglect hand hygiene.