Showers ahead as overnight winds leave another 3,000 without power 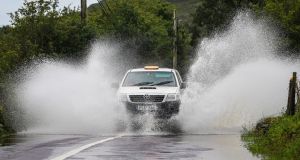 Scattered showers and some sunny spells are forecast for the weekend after further strong winds and storm damage overnight.

Around 7,000 homes and businesses are without power on Saturday - 4,000 as a result of Storm Ellen and the remainder due to additional high winds on Friday night.

The south, midlands and west of the country were worst affected, and ESB Networks said it has been working “since first light” to restore all outages.

Met Éireann said it would be mostly cloudy and breezy for a time on Saturday with showers or longer spells of rain. However, it will become drier later this afternoon with some evening sunshine developing and scattered showers.

Highest temperatures will be between 16 and 19 degrees with moderate southwest winds. Scattered showers will continue overnight with some heavy downpours later, especially across the west, the northwest and parts of the midlands.

There will be mist and fog patches too with lowest temperatures between 10 and 14 degrees.

Monkey Puzzle Tree in Mahon-watch the back left of this video carefully. For perspective-this tree was planted by William H. Crawford in his gardens at 'Lakelands' (Mahon Peninsula), probably around 1845.#StormEllen https://t.co/Uw8e1L9VpR

Sunday will bring further showery spells of rain, mainly across the northern half of the country. It will be somewhat drier elsewhere with sunny spells. However, rain will move into Munster before nightfall. Highest temperatures will be between 15 and 19 degrees, with the mildest conditions across the southern counties.

Winds in Co Cork reached almost 145km/h at the mouth of Cork harbour during Storm Ellen earlier this week, bringing down trees and power lines across Munster.

A credit union has offered to replace a 175 year old monkey puzzle tree which came crashing down on the outskirts of Cork city.

St Michael’s Credit Union, which serves Blackrock and Mahon on the city’s southside, said it wanted to replace “the iconic monkey puzzle on Jacob’s Island in Mahon” during high winds.

“This landmark tree, which was planted by William Crawford around 1845, has been enjoyed locally since it was planted and has been a beautiful sight for people travelling on the South Link Road.”

The credit union said it was liaising with the relevant departments in Cork City Council with a view to planting a new monkey puzzle, which is native to Chile and can grow up to 40 metres in height.

“The tree was part of the local history and heritage - it would be a shame if future generations in Blackrock and Mahon didn’t have the chance to enjoy another monkey puzzle,” said St Michael’s.

UCC Plant scientist Dr Eoin Lettice lamented the loss of the tree, recalling it was planted by William Crawford at his Lakelands Estate, now largely occupied by the Mahon Point Shopping Centre.

“Crawford was an eminent horticulturalist, collecting and growing plants at Lakelands from around the world. He had at Lakelands a ‘perfect arboreatum...richly planted...with rare shrubs and trees’.”

Independent member of Cork City Council and local historian, Cllr Kieran McCarthy said he hoped that the wood from the fallen Monkey Puzzle could be used locally to create some memorial.

“Sad to see this early 19th century beautiful Monkey Maze tree in Mahon snap with the force of Storm Ellen - I would love to see a wooden sculpture or seat made from remains,” he tweeted.