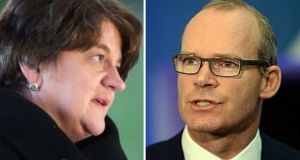 The North’s First Minister accused the Minister for Foreign Affairs of “ignoring” unionists and called on him to reflect on his language as the political fallout continued on Thursday over the UK’s unilateral decision to extend the grace periods for post-Brexit checks on some goods entering the North from Britain.

Arlene Foster was responding to comments by Simon Coveney, who told RTÉ the EU was “negotiating with a partner that they simply cannot trust.”

Ms Foster said he “talks about not having a partner you can do business with. I have to say, he should reflect on that, because he’s not listening to the unionist people of Northern Ireland. He’s ignoring them, and thinking that they’ll just go away. We will not go away, and we need to be listened to in relation to our very deep concerns.”

The First Minister and other members of the DUP – who oppose the Northern Ireland protocol because it places a border in the Irish Sea – on Thursday backed the UK government’s move, characterising it as a timely intervention ahead of the expiry of the grace period on supermarket goods to mitigate some of the difficulties caused to trade from Britain under the protocol.

Deputy First Minister Michelle O’Neill of Sinn Féin accused the British government of once again “acting in bad faith”. She said they had “demonstrated by their very deed that they are untrustworthy . . . not true to their word when it comes to negotiation.”

The action, she said, was “completely unnecessary”, given that when the EU-UK joint committee met last week there had been a commitment to find solutions “and that should have been allowed to run its course.” She called for the meeting to be reconvened again before the end of the month.

Northern Secretary Brandon Lewis also defended the move, which he said was necessary to avoid a “very real risk” of empty supermarket shelves in Northern Ireland. He also expressed his disappointment with the response from Dublin.

“I was a bit disappointed with the response I saw from the Irish Government because they themselves temporarily waived some requirements recently without an end date, so this is a common practice,” he said.

Mr Lewis rejected the suggestion London’s decision caused tensions between the two governments or that Dublin or Brussels had been unaware of the UK’s position.

“I don’t see our actions this week as an escalation, just a very sensible, pragmatic approach and something we’ve been talking to the EU about for some weeks. We hoped that we would have got an agreement with the EU on them [grace periods] before now, because of the timing issue.”

Officials had talked to the EU earlier this week and there had been “a continuity of approach from us and, as I said to Simon [Coveney] yesterday [Wednesday], we want to continue working positively on this”, he said.

The North’s Chief Constable, Simon Byrne, on Thursday called for “calmness” and “wise heads” after an organisation representing loyalist paramilitaries wrote to the Taoiseach and the British prime minister informing them that the groups were withdrawing their support for the Belfast Agreement.

The letter from the Loyalist Communities Council (LCC) – which represents the Ulster Volunteer Force (UVF), Ulster Defence Association (UDA) and Red Hand Commando (RHC) – outlined its “unanimous opposition” to the protocol but said this should be “peaceful and democratic”.

Mr Byrne said the police assessment was that this was a “political move and it is best dealt with by politicians”.

Police were carrying out work to assess the policing implications, he said, but did not see “any immediate change in emotion, or potential for disorder or violence coming from within the loyalist community. My appeal is for calm and to let the political processes take their place.”

He also revealed that there had been 200 incidents since January of criminal damage, graffiti or posters and banners opposed to the Northern Ireland protocol.

Earlier on Thursday the Stormont Agriculture Committee heard from the senior civil servant in the North’s Department of Agriculture, Denis McMahon, and the North’s Chief Vet, Dr Robert Huey, about the decision by the Minister for Agriculture, the DUP’s Gordon Lyons, to halt construction work on permanent inspection posts at ports and to suspend plans to introduce charges.

Mr McMahon confirmed that the department has sought legal advice on both points, and officials would ultimately have to comply with the law. An external legal challenge has also been launched against the Minister’s decision.

Both officials questioned whether there was the capacity to handle the amount of checks and paperwork required once the grace periods ended.

Dr Huey said that after grace periods ended meant the documentary checks required on lorries containing retail products covered by one declaration could increase more than 20-fold, and therefore the 1,350 lorries arriving in Northern Ireland from Great Britain each week would require between 20,000 and 30,000 declarations.

“That’s a huge challenge, that’s approaching the same number of Ched-P [Common Health Entry Document] checks that are done for the entire European Union, ” he said.

“And I’ve spoken about this to the commission on purely technical, not political, terms about ‘here is what I’m being asked to do by the Northern Ireland Protocol with my currently 12 vets, that’s not going to work.’ That’s where we find ourselves. So the extension of grace period, if that is what occurs, is welcomed but it’s not the solution,” Dr Huey said.

“The scale of documentary checks is huge by any standards,” said Mr McMahon, adding that 13,629 such checks were completed in January and February.

“Our population is under half a per cent of that across the European Union, yet the documentary checks, according to the systems completed so far, would represent one-fifth of the equivalent documentation right across the EU.”

Of the shipments requiring documentary checks, 88 per cent also undergo identity checks and about 5 per cent full physical inspections.

“What is clear is that we’re handling a burden of work which is stretching us to the limit, which can only get less sustainable as we move beyond the grace period, again depending on what happens,” said Mr McMahon.

“We’re achieving this ahead of a major change when the retail grace period ends, and there will be a huge increase in demand, building on current levels, which will not be sustainable with the staff and resources currently available to Daera [the Department of Agriculture].” Additional reporting – PA.